All eyes have been on Colorado since its voters last year legalized recreational use of marijuana. 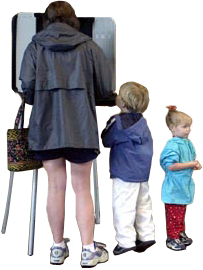 This election day, we get to see if Colorado voters will agree to impose a 15 percent excise tax on weed. The tax would be on the average wholesale price of retail marijuana. It would apply when the plant product is first sold or transferred by a retail cultivation facility.

The marijuana excise tax is just one part of Proposition AA.

The measure also asks voters whether they want to add a 10 percent sales tax on retail sales of the herbal tobacco -- that's you buying the weed, dude! -- at a licensed marijuana retail store. The new tax would be in addition to the state's existing 2.9 percent sales tax.

Voters must approve or reject both taxes together. State fiscal analysts project that the tax duo would bring in $70 million a year. If approved, the excise and sales taxes would take effect Jan. 1, 2014.

The sales tax revenue would go to fund pot-related law enforcement efforts. The excise tax money would give the state more money to spend on school construction projects.

Is it just me, or is Brownsville Station's "Smoking in the Boys' Room" running through anyone else's head right now?

More tax votes nationwide: While Colorado's pot taxes vote will get lots of attention, other tax propositions are among the 31 initiatives on six state ballots today.

Here in my home state of Texas, we're being asked to decide four tax-related ballot initiatives:

Yeah, that aircraft parts tax ballot question is pretty arcane, even for the Lone Star State. But that's how we roll down here, putting just about anything you can imagine to a constitutional amendment public vote.

That's why the Texas Constitution is the longest such document in the country. From 1876 through 2011, Texas lawmakers had put 653 amendments before voters, 474 of which passed.

Explains a lot, doesn't it?

Again, the votes cast by the Evergreen State residents won't produce any new, changed or rejected tax laws. But the symbolic results will let lawmakers know the general opinion of the voting population on these issues.

The voters' muted voice: Or not, depending on turnout.

It's tough to say that a miniscule percentage of voters, which is what we typically get nationwide in off-year elections like today's, is demonstrative of what any state's citizenry really wants.

The only way to make sure that any votes and voting patterns are accurate reflections of the overall public sentiment is to vote.

So if you haven't gone to your polling place yet, get there and make your voice heard.

And if you still have questions about any ballot initiatives in your area, check out Project Vote Smart, Ballotpedia, Ballot Initiative Strategy Center, Citizens in Charge and the National Conference of State Legislatures ballot measures database.