Boeing gets $8.7 billion tax break to stay in Washington State

Washington State on Monday, Nov. 11, enacted the largest corporate tax break any state has ever given to a single company.

Boeing, the giant aerospace company from which Seattle gets its Jet City nickname, is the beneficiary. 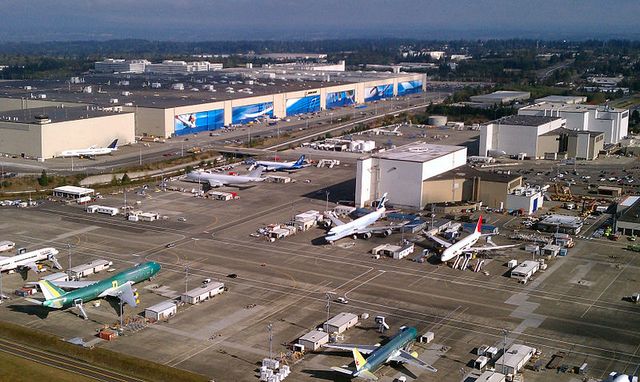 Boeing's Everett, Wash., factory as seen from above in October 2011; Photo by Jeremy Elson via Wikimedia Commons

The new law extends a business and operating tax cut for the aerospace giant through 2040, streamlines the permitting process and invests in a transportation package the company had sought.

The hurried crafted tax package, estimated to be worth a total $8.7 billion over the many years of its implementation, was designed to keep manufacture of Boeing's new 777X jet in Washington state.

A lot, but not enough? But even the sweetheart tax deal might not be enough.

Although Washington Gov. Jay Inslee has signed into law the legislation that was approved by the legislature in a weekend special session, the machinists union still must vote today, Nov. 13, on a new contract.

At the tax package's signing ceremony Monday, Boeing Commercial Airplanes CEO Ray Conner said that despite the state's giveaway action, the company still could move 777X production to another state if the union rejects the company's offer.

The union said the Boeing's proposal to convert traditional defined benefit pension plans to defined contribution 401(k) style retirement accounts was too big of a concession.

Despite Washington State's almost $9 million in tax breaks approved in part to keep the 777X jet production in the Seattle area, Boeing executives said the union's "no" vote means the company now will explore other, out-of-state options.

My question: Are all the new tax breaks contingent on Boeing building the 777X within the state? Or will Washington State  legislators repeal the tax package if Boeing does move the jet manufacture and its estimated 20,000 jobs to another state?

Just the latest government gift: "These subsidy awards are getting out of control," said Philip Mattera, research director of Good Jobs First, a Washington, D.C.-based resource for grassroots efforts to make economic development subsidies and those who award them more accountable. "Huge packages that used to be reserved for 'trophy' projects creating large numbers of jobs are now being given away more routinely."

They were in connection with his organization's examination this summer of the tax packages offered nationwide to companies.

In its report Megadeals issued in June, Good Jobs First analysts identify 240 subsidy awards that come to state and local costs of $75 million or more each. The cumulative cost of these deals, says the report, is more than $64 billion.

The taxpayer money ostensibly is to encourage investment and the creation or retention of jobs. Other less tactful analysts call this a system of bribes and extortion payments.

More, more, more: And the trend is escalating. The report says that since 2008 the average number of megadeals per year has doubled compared to the previous decade.

The deals' annual cost has roughly doubled as well, averaging around $5 billion.

For deals in which job projections were reported, Good Jobs First found that the average cost per job is $456,000.

Most deals, most dollars: At 2013's halfway point, Good Jobs First found that 40 states and the District of Columbia had awarded at least one megadeal. 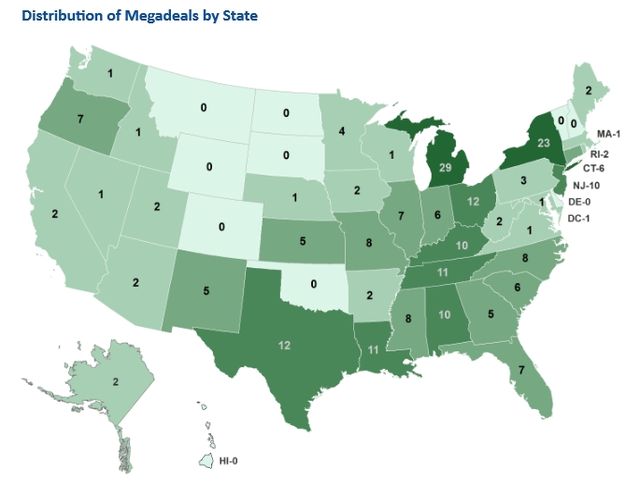 Four states, according to the report, had a dozen or more, while 18 had only one or two.

The state with the most megadeals back in June was Michigan, with 29. It was followed by New York with 23; Ohio and Texas with a dozen each; Louisiana and Tennessee with 11 each; and Alabama, Kentucky and New Jersey with 10 each.

Before Washington's blackmail payment tax deal this week to Boeing, New York was spending the most. The Empire State's megadeals through June totaled $11.4 billion.

At the time of the report, Michigan was next with $7.1 billion. Washington was in the next group of big spenders five months ago, falling then in the $3 billion range, with $3.2 billion in subsidies, along with four other states: Oregon ($3.5 billion), New Mexico ($3.4 billion), Louisiana ($3.2 billion) and Texas ($3.1 billion).

A total of 21 states have megadeals costing $1 billion or more.

Other studies agree: The Megadeals report is just the latest study that looks askance at state and local tax breaks for businesses.

Other studies also have argued that states might win a corporate relocation battle or two by firing high-powered tax break ammunition, but they could eventually lose the war.

If the big tax breaks add to problems balancing state and local government bottom lines, they could backfire.

Lawmakers also have to be aware of potential taxpayer backlash if the company that's lured with special tax deals ends up providing less economic benefits -- and fewer jobs -- than promised.

Still, it looks like states and lower governmental jurisdictions are willing to give big business what it wants. For now.

Has your state, city or county offered a special development deal to a company? How much did it cost you? Was it worth it?