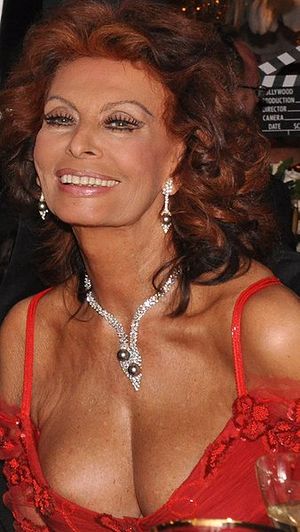 Sophia Loren, Italy's most renowned, honored and for moviegoers of a certain age hottest actress has been cleared of tax evasion charges after nearly 40 years.

You read that right. The 79-year-old actress was convicted of and served jail time on charges from 39 years ago that she did not pay taxes on some film earnings.

At issue was Loren's 1974 tax return. She declared less income to Italian tax authorities that filing year because, argued Loren, her compensation for work on Vittorio De Sica's The Voyage/Il Viaggio was deferred.

That payment arrangement dropped her into a lower tax bracket, allowing her to pay, according to Loren's calculations, taxes on 60 percent of her income. Italian tax officials, however, said Loren owed taxes on 70 percent of her film money that year.

She also worked outside of her native Italy for several years during the tax dispute. But when Loren returned to her homeland in 1982, she served 17 days of a 30-day jail term in a minimum-security women's prison.

Loren, however, never gave up the tax fight. Her appeal of the tax evasion charge has been inching its way through the Italian justice system for nearly 40 years. And you thought the American court system was slow!

And now Loren is finally vindicated thanks to last week's Italian high court ruling that she was wrongly convicted of tax evasion.

Loren is as gracious as she is glamorous.

She called the ruling a "miracle of justice," adding that when "it seems there is no longer any hope, it is still possible justice will be done."

Appealing IRS findings: U.S. taxpayers, remember that like Loren you, too, can appeal Internal Revenue Service findings with which you disagree.

Your best bet in any conflict with the IRS is to hire a tax professional who's experienced in handling such cases.

Loren then and now: If you're unfamiliar with Loren's roles, you can check out some of her early film work in a box set issued in 2008. I'm not a Netflix subscriber, but I suspect you can find those movies and Loren's later award winning performances at that entertainment site.

And for younger readers looking for a modern connection, Loren is the mother-in-law of TNT television's Rizzoli and Isles actress Sasha Alexander.

40 years is a very long time to have a tax evasion charge. I wonder how many years she have stressed over trying to get the charge removed.