Benjamin Franklin's famously noted that there are only two sure things: death and taxes.

I'd like to add a third: Congressional Groundhog Day.

Yes, our Representatives and Senators, at least this current crop, seem to like doing the same thing in the same way over and over and over.

I am talking, of course, about lawmakers' penchant for walking to the brink of financial and tax disaster and peering over the edge. 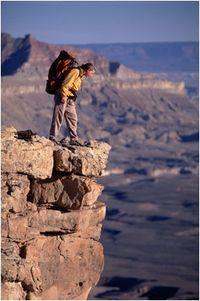 Sorry history of fiscal brinksmanship: We had it with the debt ceiling fight during the summer of 2011.

That led to the 2012-2013 fiscal cliff, which we briefly fell off of before Congress pulled itself and the country up by their fingernails.

Then there was the sequester, a direct result of Congress not being able to meet the budget deal mandate that was part of the 2011 debt ceiling deal. It's enactment on March 1 meant three Internal Revenue Service furlough days this summer that slowed down some tax tasks.

And yesterday evening, the House and Senate approved a combined debt ceiling-government shutdown-budget deal that the president actually signed early this morning, Oct. 17, the day we reached the very end of Uncle Sam's borrowing limit.

Guess what? This latest deal just resets the ticking clock.

Yep, we get to do this all again in January, when money for federal offices runs out. And I do believe we'll go down to the wire again because that apparently is how Congress now rolls.

Geez, people. Get it together already!

Tax filing season trouble ahead? I am really, really glad that a deal was struck.

I'm also glad that federal workers who've been off the job for more than two weeks are back at their desks -- and at St. Louis' Gateway Arch, which I now can visit this afternoon before the FinCon13 financial bloggers conference that I'm in town for begins!

But I fear that come Jan. 16, we'll be back in a federal government shutdown situation that could pop today's celebratory grand federal facilities' reopening balloon.

And while a government shutdown, even a partial one, is a problem for almost every one at any time, it will be major hassle for millions of taxpayers in January.

That's the month that that federal tax filing season begins.

January is prime tax rush hour for folks expecting refunds. As soon as they get their W-2 forms that month, they send the IRS their returns.

The IRS also usually opens Free File the third week of January. This year, Congress' inability to do its job in a timely manner pushed that program's opening to end of the month.

If the tax agency has to furlough folks again as next year just gets started, early filed returns could sit at the IRS unprocessed, leaving taxpayers waiting anxiously and angrily for their 2013 refunds.

Sure, it probably won't be as bad as this delayed filing season, which saw millions of taxpayers have to put their return completion plans on hold while the IRS played catch-up. The agency had to update more than 30 forms that changed on Jan. 2 when Congress finally approved tax law changes affecting 2012 returns.

We also went through this in 2011 when late passage of extenders forced some taxpayers to wait until mid-February to file their returns. And also in 2008 and 2007 filing seasons when taxpayers had to delay submission of their returns if they were claiming certain tax breaks, again because the IRS needed time to deal with legislation that Congress passed late in the previous year.

Do your jobs! But just because we citizens and taxpayers are reluctantly used to such Congressional shenanigans, that doesn't mean we like them.

Any delay is problematic for lots of folks who depend on their annual federal tax refund checks.

So right now I'm putting Representatives and Senators on notice.

We taxpayers, even those of us who don't get refunds, are officially tired of this.

We are trying to do our taxpaying duties within the time frame you've given us.

Then you go and screw around, either in putting off legislative tax changes until the last minute or fighting about federal financing until the eleventh hour, and we law-making bystanders end up paying the price.

Don't do it to us again this coming January!

If you do insist once more on throwing the federal government in general and the IRS in particular into chaos, you can bet that we taxpayers, and especially those of us who have to wait longer for refunds, will remember when we vote in November.