For the last decade, the Washington, D.C.-based tax research organization has evaluated how the states' tax systems help or hurt business competitiveness. The most recent analysis, says the Tax Foundation, finds Wyoming, a repeat winner, is the best place to operate a business. 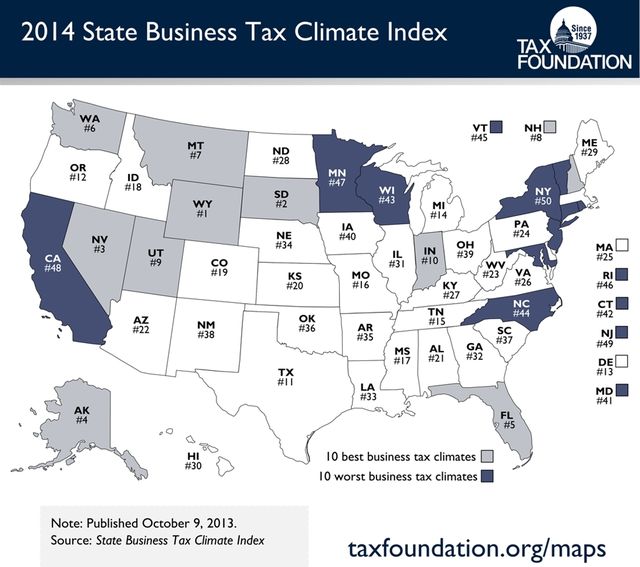 The top 10 list is rounded out, from two to 10, by South Dakota, Nevada, Alaska, Florida, Washington, Montana, New Hampshire, Utah and Indiana.

Most of the states on this year's best for business list are in the west: Wyoming, Nevada, Alaska, Washington, Montana and Utah.

Texas, which I as a native West Texan have always considered western, fell out of the listing's top 10 this year. It's number 11 in the latest tally.

Here's how the Tax Foundation explained the drop in the Lone Star State's ranking:

"Texas has been a top ten state in the Index for several years, but this year was ousted by Indiana, which has made steady strides to improve its code in recent years. … By contrast, Texas's code has remained mostly constant, and its problematic Margin Tax (a modified gross receipts' tax) hurts both its corporate component score and individual component score, because both C-corporations and pass-through businesses that usually file in the individual code have to comply with the tax. While economically successful, in part due to having no state income tax, Texas will need to address the Margin Tax to regain a top ten ranking."

Bringing up the bottom: My peripatetic governor has been traveling across the country trying to convince companies to relocate to Texas (Democrats and skeptics think he has ulterior motives).

Given this new state tax climate analysis, he likely is tweaking his upcoming itinerary.

Perry has already been to three of the states that bring up the bottom of the business tax climate list: Maryland (41st), California (48th) and New York (50th).

Trouble with temporary tax breaks: While Perry is selling the overall business and tax benefits of Texas, many states and cities -- including my current hometown of Austin -- often cut deals with businesses to get them to move.

The Tax Foundation, however, advises against such short-term special tax breaks. An example cited by the group, and which I noted in my Wyoming is best for business post at Bankrate Taxes Blog, involved a Texas company.

North Carolina offered $240 million in incentives, primarily state and local tax credits, to get Austin-based Dell Computers to set up a branch in the Tar Heel State. But Dell closed the operation after only four years.

Health care concerns: A major concern of and cost for businesses regardless of where they have facilities is health care.

While larger firms often offer medical plans to employees, smaller businesses usually don't or if they do, they offer plans that require employees to pay more.

Last week at my other tax blog I also looked at health savings accounts, or HSAs, a tax-saving health care option that many workers might find appealing.

You can check out what I'm saying about taxes at Bankrate.com on most Tuesdays and Thursdays. Or you can find a synopsis of the previous week's tax thoughts from there over here on the ol' blog the following weekend -- or Monday when the weekend expands to three days thanks to a federal (Happy Columbus Day!) holiday.