"Stay (Faraway, So Close)" isn't just the title of a U2 song. It's a good description of the popular Irish rock band's tax situation. 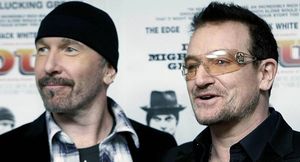 The band, fronted by Bono and The Edge, has sold more than 150 million records and is estimated to be worth around €805 million ($1.1 billion U.S.). And like lots of businesses and their wealthy owners, U2 found a way to reduce its taxes.

U2 moved part of its operation from its native Ireland just across the North Sea to Holland in 2006 to take advantage of that country's lower tax rate. The reason? Ireland capped the artists' tax exemption at €250,000 ($338,375 U.S.).

Tax tactics under fire: A recent interview Bono gave to Great Britain's The Observer, has put U2 tax tactics back in the news.

Reporter Tim Adams noted that the band is continually criticized about its decision to offshore part of their income through the Netherlands to avoid Ireland's tax.

"Was it not hypocrisy for you to try to hold the Irish government to account for its spending while going through fairly exhaustive efforts to avoid paying into the Irish exchequer yourself?" Adams asked Bono. The singer's answer:

"It is not an intellectually rigorous position unless you understand that at the heart of the Irish economy has always been the philosophy of tax competitiveness. Tax competitiveness has taken our country out of poverty. People in the revenue accept that if you engage in that policy then some people are going to go out, and some people are coming in. It has been a successful policy. On the cranky left that is very annoying, I can see that. But tax competitiveness is why Ireland has stayed afloat. When the Germans tried to impose a different tax regime on the country in exchange for a bailout, the taoiseach [Prime Minister of Ireland] said they would rather not have the bailout. So U2 is in total harmony with our government's philosophy."

OK, Bono. I hear you, but your explanation is still not going to stop the criticism. But then you know that, also telling the newspaper, "I think for many reasons people have taken a dislike to our band and to me. This is another one."

Legal if not likeable: Let's be clear about a few things.

U2 and Bono and his band mates are not breaking any laws. They can set up their corporate structure where they wish for any reason. Doing so to lower taxes is a common move made by taxpayers worldwide.

U2 didn't shut down factories and throw hundreds of people out of jobs when they moved their music making business from Ireland to The Netherlands.

U2 made most of their money in countries other than Ireland. In reality, they are true global citizens. So if they decide for tax reasons to pick a spot on the planet that means they pay smaller tax bills, they are pretty financially smart global citizens.

OK only for some? We have very complex relationships with celebrities and money. We love or hate them, but either emotion tends to make them more marketable. That means they make more money.

Once they reach the top, both of their professions and in the earnings rankings, we decry all the cash they get for "just singing songs" or "playing a game" or "starring in bad movies."

Meanwhile, when asked as was the case earlier this year by ABC News/Washington Post pollsters whether we approve or disapprove of people doing all they can within the law to lower their taxes, 85 percent of us said such tax avoidance moves are fine.

So what is it? Is it only fine to make smart tax moves to lower tax bills when we do it or when someone who isn't quite so rich does it? But it's a bad thing when a gazillionaire does the same thing? How do you think gazillionaires got and stay that way?

And while Bono was trying a bit too hard in his answer -- Really? You just had to use "in total harmony with our government's philosophy" when talking about taxes? -- I can't slam him or the band for what they've done. I'd do the same in a heartbeat if I ever obtained a fortune. I suspect most of us would.

"I think there is that issue about loyalty to the country you are born in and I think it would show a tremendous example to everybody if they were to bring back their tax affairs to Ireland," said Shorthall. "In any modern democracy people pay their fair share of tax."

Sorry, Minister Shorthall. National pride and tax bills are two different things. I can love my country dearly, but do everything I can legally to avoid paying more than I should in taxes. Different leaders at different times may choose to spend my tax dollars in ways I don't like, so I don't want to give them any more than they are due.

And if someone is following tax laws, they are paying their fair share. They're just not following the tax laws of the country you'd like them to follow or paying what you've decided is a fair share.

We're having a similar tax discussion here in the United States, where international companies are under scrutiny for using tax laws in other countries to reduce what they owe Uncle Sam.

The United States, unlike most other countries, taxes all income based on individual residency on where companies are incorporated. Apple, Google and other corporate giants opted to set up operations in Ireland, which focuses on where they are managed and controlled. This so-called Double Irish tactic allowed the international operations to effectively fall between the jurisdictional cracks of the two countries.

Now I learned well the lessons of my mother, so I know that just because everyone else is doing it doesn't make it right, at least not ethically or morally. This applies to tax compliance as well as everything else in life.

But as long as the laws allow cross-border maneuvers to lower taxes, both for individuals and companies, taxpayers will utilize them.

If you don't like the result, change the rules. Or, as another singer famously said, don't hate the player, hate the game.