Remember the infamous 47 percent of people who didn't pay taxes?

Sure you do. Those were the folks cited in a 2009 estimate by the Tax Policy Center (TPC) who inadvertently sabotaged Republican presidential candidate Mitt Romney's quest for the White House when he was caught on video tape characterizing them as government dependent takers instead of economic growth makers.

That group is now 4 percent smaller, according to the latest analysis by TPC, a joint venture of the Urban Institute and Brookings Institution.

The 43 percent of Americans whom TPC analysts project won't owe federal income taxes in 2013 also is this week's By the Numbers figure.

Actually, the number of individuals who don't have to pay the U.S. Treasury any money has been dropping over the last few years.

The count went from a full half of us who didn't owe Uncle Sam money in 2008 to the widely publicized 47 percent to 45 percent in 2011 and now the estimated fall of a few more percentage points in 2013.

Adding to the taxpaying ranks: How did the decrease in nontaxpayers come about?

The improving economy and the expiration of temporary tax cuts means more Americans are working and making more money, says Roberton Williams, the Sol Price Fellow at the Tax Policy Center. That means more of us are now earning enough to require that we file a 1040 with the Internal Revenue Service.

You can check TPC's numbers at its breakout of tax units that pay no individual income tax in 2012, 2013 and 2014. A tax unit for TPC calculation purposes is an individual, or a married couple who file a tax return jointly, along with all dependents of that individual or married couple.

The nonprofit Washington, D.C., think tank also produced the video below to explain what's happening and why the number of people paying no federal income tax is falling.

Other taxes owed: While the TPC expects 43 percent of Americans won't pay federal income taxes, the organization also notes that most of these folks will pay some other type of taxes, most notably the payroll tax. 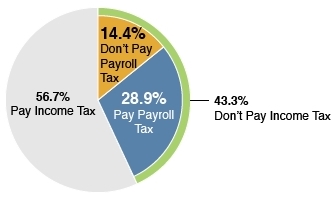 Almost 29 percent of those who don't have to file a federal income tax do have FICA, or Federal Insurance Contributions Act, taxes taken out of their paychecks.

These are the taxes, paid by employers and employees, that go toward Social Security and Medicare.

Who are these people? 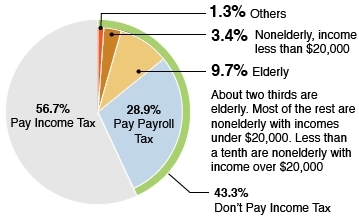 TPC says that the elderly, which it characterizes as age 65 and retired, make up around 10 percent this no-tax group.

Since they aren't working, they are no longer making payroll tax contributions.

And what income they have is either nontaxable Social Security benefits or other earnings that are too low to require filing.

Another 3.4 percent of folks not paying taxes are those whose income is too low -- less than $20,000 in TPC calculations -- to force them to file a tax return.

That leaves, says TPC, just slightly more than 1 percent of individuals who pay no taxes. In most of these cases, these individuals are taking advantage of tax breaks, such as the Earned Income Tax Credit (EITC) and child tax credit, that help them erase any taxes they might owe.

Many of current tax breaks also are available to other taxpayers, even the wealthiest among us.

"People at the top end get much, much larger tax benefits in dollar terms than people at the bottom," says Williams. "It's just not enough to zero out their income."