Admit it. You wish you had been in Denver yesterday.

That's where opponents of a special sales tax on personal use of pot rallied support for their cause by handing out more than 1,000 marijuana cigarettes. 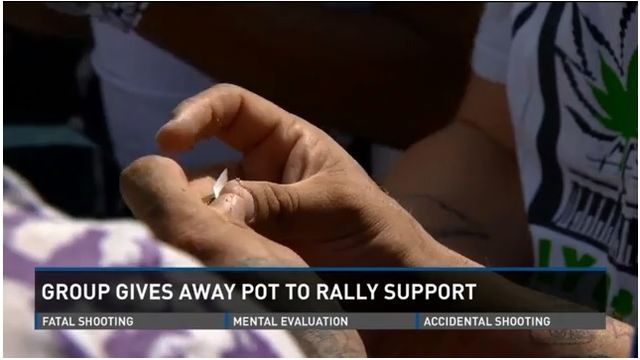 Marijuana cigarettes passed out in Denver to protest a proposal to add a sales tax to recreational pot sales. Click image to watch WUSA 9News video.

The sales tax initiative will be on Colorado's November ballot.

Colorado voters last year approved recreational use of marijuana. Individuals age 21 and older can possess up to an ounce marijuana for personal use, as well as grow six plants and give up to an ounce as a gift to someone who also is 21 or older.

Marijuana regulations, taxes: Personal pot smoking will be regulated like alcohol. There are penalties for impaired driving and other misuse.

And like alcohol, there never was any secret that marijuana bought for recreational use would be taxed.

But marijuana activists say the proposed taxes are too much.

Voters will decide in November on two taxes, one statewide and the other Denver-specific, on weed.

The first would be a statewide 15 percent excise tax and an initial 10 percent sales tax on recreational pot sales.

Denver officials also want to add an initial 3.5 percent sales tax to those sales. The city-specific tax could rise to 15 percent.

Although there are two taxes, voters will get just one vote on their ballot via Proposition AA to say yea or nay to both levies.

Colorado Futures Center at Colorado State University estimates that taxes on recreational marijuana could generate about $130 million in revenue during the first year.

Corry also helped organize this week's tax protest because, he says, the proposed tax on the recreational marijuana sales is heavier, thanks to the special sales tax proposals, than what the state collects on booze.

"It is the government that is being disingenuous and they're performing a bait-and-switch misleading the Colorado voters," Corry said.

When you tally the standard retail sales taxes on purchases and the marijuana add-ons, Corry says the combined tax rate on pot in the Mile High City could be as much as 52.62 percent.

Such a high tax rate, argue pot tax opponents, could push buyers away from legal sales outlets and onto the black market. Wiping out such surreptitious sales was one of the goals of legalizing recreational pot.