IRS lays out plan to deal with federal government shutdown

With each passing minute, we get closer to the first government shutdown in 17 years.

That raises the question of what's next in the tax world if that happens. 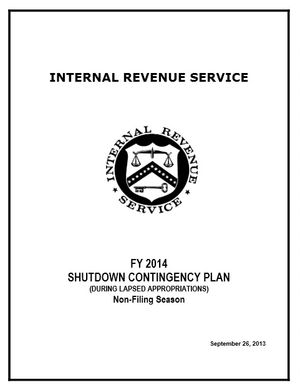 The Internal Revenue Services has a plan. Its 61-page shutdown contingency document details the agency's preparation for and implementation of a shutdown of its services and offices, as well as reactivation of tax functions.

The key thing for the millions who got an extension until Oct. 15 to file their 2012 tax returns to note is that the IRS expects you to meet that deadline. Even if most of the federal workers across the country, including many IRS employees, aren't on the job, the country's other laws remain in effect.

For taxes, that means if you miss getting your Form 1040 in by the Oct. 15 extension deadline, failure to file penalties will start.

And because that filing deadline is firm, 15 is this week's By the Numbers figure.

Excepted shutdown employees: The IRS expects 90 percent of its almost 86,000 employees will be furloughed if the House, Senate and president can't come to an agreement that will provide enough money, at least in the short term, to keep the federal government running.

Who is part of the relative handful of IRS workers who would be expected to come to work tomorrow?

Under the Antideficiency Act, which sets out which federal government activities can continue even when Uncle Sam officially shuts down, "activities necessary for protection of life and property" are excepted from the shutdown.

Since the IRS is responsible for the collection of the revenue the United States needs to operate, some agency jobs fall into this essential employees category. The IRS estimates that of its 8,752 excepted employees, 8,273 do jobs that fall into the "protection of life or property" category.

This includes, according to the IRS shutdown contingency plan, those employees involved in the processing of tax returns, protection of lien and seizure cases, maintaining building security and facilities personnel and criminal law enforcement operations.

So your last-minute tax filing will be processed.

The IRS plan also calls for workers in charge of certain services it provides to the Social Security Administration to be at their desks regardless of what happens on Capitol Hill in the next few hours.

IRS staff involved with the design and printing of 2013 tax year's forms and the completion and testing of programs for the upcoming 2014 filing year also would continue doing those jobs as necessary excepted activities during a federal government shutdown.

Who's not working: The majority of IRS workers who focus on nonexcepted functions would be at home, just like they were on the agency's May 24, June 14 and July 5 sequester-prompted furlough days.

These are folks who work at the IRS headquarters and elsewhere in administrative, legal and audit and examination capacities.

Also off the job if the government shuts down Oct. 1 are IRS employees who process paper returns that do not include tax payments and those in positions that provide taxpayer services.

Short-term shutdown time frame: The IRS is being hopeful in its contingency plan.

It anticipates that if the government does close most of its doors, the shutdown would last no more than five days.

However, if a government shutdown drags out longer than that, the IRS would have to get a reassessment of its contingency plan from the IRS deputy commissioner for operations support.

As you might expect, the possibility of a government shutdown was a topic I covered last week at my other tax blog.

Over at Bankrate.com I reminded readers and procrastinating taxpayers that their tax returns are still due during a government shutdown.

In addition, I looked at some states where tax amnesties are underway. Certain residents of Arkansas, Connecticut and Louisiana who didn't pay past year business or individual taxes in those jurisdictions get a chance to come clean. The main thing in these and most amnesties is that when you pay up you'll typically face less severe penalties than if the tax collectors find out about your delinquent taxes on their own.

You can check out what I'm thinking at the Bankrate Taxes Blog on most Tuesdays and Thursdays. Or you can find a synopsis here on the ol' blog the following weekend ... or early in the next week if I get distracted by, say, something like the series finale of the wonderful Breaking Bad.

Nice post. I learn something totally new and challenging on blogs I stumble upon everyday. It will always be useful to read through articles from other authors and practice a little something from their sites.

I AM NOT A GOVERNMENT EMPLOYEE. when I am not at work, my employer does not pay me. also, if someone who works for me does not show up for work, I do not pay them.
will you be as so kind to explain to me how I will get in trouble if I have my tax preparer deduct the two weeks worth (or at least "90 percent" of it) of federal withholdings from my tax return? (the two weeks worth that was deducted to pay MY EMPLOYEES WHOM WE COLLECTTIVELY HIRED that did not show up for work?)

Remarkable things here. I am very happy to look your article. Thank you so much and I am looking ahead to contact you. Will you kindly drop me a mail?