State taxes, assorted fuel fees, drive up cost of a gallon of gas

Are you taking a road trip this Labor Day weekend? You'll pay more for gas if you're traveling in one of these 10 states: California, Connecticut, Florida, Hawaii, Illinois, Indiana, Michigan, New York, North Carolina and Washington.

Those states, according to the American Petroleum Institute's July 2013 report (the oil industry trade group updates its data quarterly), top the list of taxes added to the pump price of gasoline.

The listing above is alphabetical. Here's how they line up when you sort them based on the taxes charged per gallon of gas:

The gas tax amounts above are the combined federal gasoline excise tax of 18.4 cpg and the added taxes and other fees that states assess in connection with the fuel.

The national average of combined gas taxes in the API's latest analysis is 49.4 cpg. Nineteen states have federal, state and local taxes and fees that are greater than that average.

Federal gas tax: Some quick notes about the federal gas tax, which first appeared in 1932 as a way to fight growing deficits.

In the first year of existence, the Internal Revenue Service reported that it generated $125 million tax dollars, nearly 8 percent of all federal revenue. Since its inception, the gas excise tax has increased 10 times. The most recent hike was in 1993 when it was set at the current 18.4 cpg rate.

But while Uncle Sam has been holding the gas tax line, states regularly tweak their assorted fuel-related charges.

Those charges, as noted in Bankrate.com's slide show look at the top 10 gas tax states, contribute to the price we pay at the pump. That listing also is the Weekly Tax Tip.

State taxes only: The midyear evaluation by the American Petroleum Institute put California at the front of the gas tax parade. 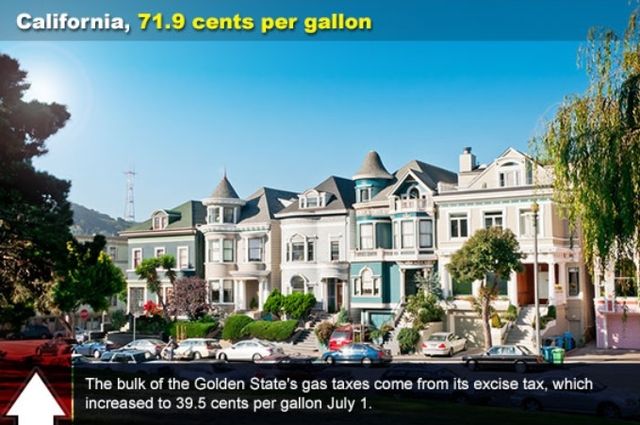 It is indeed the Golden State's gasoline excise tax, which increased 3.5 cents to 39.5 cpg on July 1, that helped it earn this current dubious honor.

Those taxes are enough to help make California the state with the second-highest cost for operating a car.

Sometimes those other taxes and fees really add up.

Take Florida. It made the top 10 gas tax list, but when compared to the other 49 states and the District of Columbia, its gas excise tax of 4 cpg comes in dead last. The Sunshine State, however, adds another 31.4 cents to each gallon of gas bought in there.

State gas taxes only: The list below provides a look at how the states rank (July 2013 data) as far as just their excise tax on gasoline.

The average state gasoline excise tax the second quarter of 2013 is 20.9 cpg, according to API, up 0.3 cpg from the first quarter analysis done in April. That puts Iowa and Massachusetts, each with a 21 cpg state gas tax, and West Virginia with its 20.5 tax on either side of the break point.

Before you head out or while you're on the road, Gas Buddy and Mapquest can help you find the best pump price bargains.

As you watch the dollar amount roll by while you fill up, you can ponder the tax component.

Gas taxes also could be a more fun part of your end-of-summer travels. Use the tax data as a new road trip game, such as car bingo, with the kids to enhance their math skills before the new school year kicks in in earnest.