Social Security same-sex benefits limited (for now) to states where such marriages are legal. Will IRS follow suit?

Same-sex couples are still waiting for the Internal Revenue Service to issue guidance on how it will process their returns.

We might have an indicator from the Social Security Administration (SSA).

The federal retirement benefits agency announced on Aug. 10 that, in response to the Supreme Court ruling invalidating the Defense of Marriage Act (DOMA), it is now processing claims for those in same-sex marriages.

But, and it's a big but, Social Security is only issuing benefits for claims by residents of states where same-sex marriages are legal. That limits the benefits, for now, to residents of 13 states and the District of Columbia. 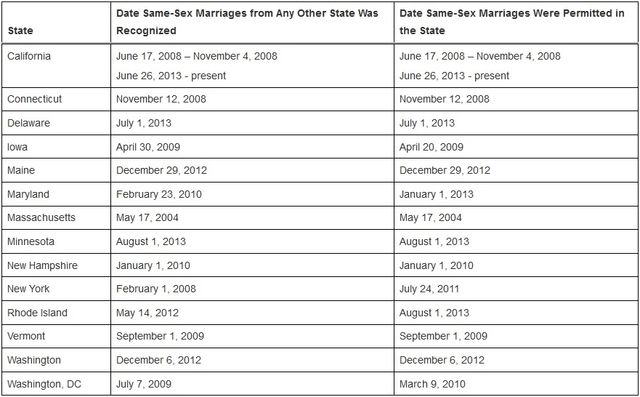 When it comes to considering a claim of, for example, a same-sex couple legally married in Maryland, but who now live in Texas and "meet all other factors of entitlement," the SSA has instructed its employees via its operations manual to "hold the claim."

That has lots of folks asking two questions?

Domicile determinant: The SSA position differs from the other executive agencies, which have indicated they will recognized and award benefits to all couples whose marriage was legally performed. Where they live now is not a consideration.

The Department of Homeland Security, notes Chris Geidner of BuzzFeed, announced that "as a general matter, [U.S. Citizenship and Immigration Services] looks to the law of the place where the marriage took place when determining whether it is valid for immigration law purposes."

Secretary of State John Kerry took a similar position in connection with the issuance of visas.

And the Office of Personnel Management (OPM) has issued a memo declaring that "benefits coverage is now available to a legally married same-sex spouse of a Federal employee or annuitant" and that "legal same-sex marriages entered into following this decision will be treated in the same manner as opposite-sex marriages." In all instances, said OPM, the same-sex marriages are considered legal for benefits purposes "regardless of the employee's or annuitant's state of residency."

The SSA, however, is relying on the issue of domicile; that is, whether the state where a same-sex couple lives recognizes the marriage.

Will Baude, writing for The Volokh Conspiracy blog, says, "I assume that this stems from 42 U.S.C. § 416(h)(1)(A)(i), a special statute dealing with choice of marital law for social security claims:

Will that statute stand? Maybe. Maybe not.

"We continue to work closely with the Department of Justice. In the coming weeks and months, we will develop and implement additional policy and processing instructions. We appreciate the public’s patience as we work through the legal issues to ensure that our policy is legally sound and clear."

What will IRS do? That brings us to question number one. Will the IRS follow Social Security Administration and limit same-sex marriage tax filing and claims to residents of states were such marriages are legal?

Domicile is frequently cited in tax law and IRS guidance, so the thought is that the IRS will take this same approach, for now, as SSA.

Officially, we're still stuck with the IRS' vague statement of June 27 on how it will handle tax issues now that DOMA is dead:

"We are reviewing the important June 26 Supreme Court decision on the Defense of Marriage Act. We will be working with the Department of Treasury and Department of Justice, and we will move swiftly to provide revised guidance in the near future."

Given the other issues, ranging from charges of targeting nonprofit applications and an incoming new commissioner, it's not that surprising that the IRS hasn't yet dealt with DOMA. Remember, there's always the option of filing amended returns, so that gives the agency and taxpayers some breathing room.

And by waiting until it, like the SSA, hears from attorneys at the Department of Justice, the IRS may be hoping it will only have to issue one set of guidance instead of putting out information and then updating it.

So we tax geeks and affected taxpayers wait, trying to read the tax tea leaves of other federal agencies' actions when it comes to life after DOMA.