Welcome to my tax world, same-sex married couples. Treasury and the Internal Revenue Service today announced that you can file a joint tax return regardless of where you live.

If you were legally married in one state, that's good enough for the federal government when it comes to your tax returns. Even if you move to a state that does not recognize same-sex marriages, the IRS will still take your joint 1040.

The decision applies to affected couples who got extensions of their 2012 returns (due Oct. 15), those who married in 2013 and will file their first taxes as a couple next filing season and married same-sex couples who want to amend up to three years of old tax filings.

OK, all you tax sticklers, stop the email you're composing. Technically, same-sex married couples must file a joint tax return or file as married filing separately. Those are the only two filing status options generally available to husband and wives.

Residency not a factor: One thing was clear when the U.S. Supreme Court decided on June 26 that a key section of the Defense of Marriage Act, or DOMA, was unconstitutional. Same-sex wedded couples who live in states that recognize their marriages would be able to follow all tax laws that rely on marital status. 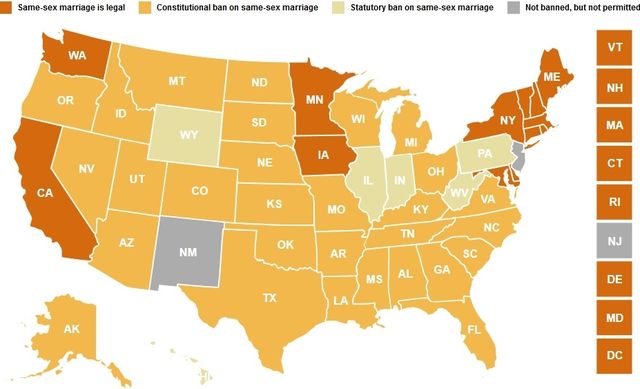 Click on image to go to CNN's interactive version.

But the tax situation for married couples who moved to states that do not recognize or expressly prohibit same-sex marriages was less clear. Until today.

In most cases, the federal government has deferred to state laws in the realm of marriage. But the IRS had decided back in 1959 that it would accept common-law marriages for federal filing purposes even if the couples no longer lived in the state in which they declared their informal marriage.

That married filing status precedent, along no doubt with the realization that having to track the residency of tens of thousands or same-sex married couples, apparently came into play.

So now same-sex couples don't have to worry about tax complications when they move.

Good news for IRS as well as couples: Among those who acknowledged that the tax decision is a win-win is Treasury Secretary Jacob Lew.

"Today's ruling provides certainty and clear, coherent tax filing guidance for all legally married same-sex couples nationwide," said Lew. While he's noting the benefits to the affected couples, such uniform filing for all married couples will make it much easier for the IRS to process returns.

And all taxpayers can be thankful for any decision that makes it easier for the tax agency to process all returns, and refunds, as quickly as possible.

As for the residency issue, Lew noted that it "assures legally married same-sex couples that they can move freely throughout the country knowing that their federal filing status will not change."

Reaction from lesbian and gay advocacy groups was similarly positive.

"This announcement makes today a day of celebration and relief for married same-sex couples all over America. At long last, the IRS will treat them as what they are: married," said Evan Wolfson, president and founder of Freedom to Marry.

Amend away, within time limits: Same-sex couples who in past years filed separate returns as single taxpayers now can file amended returns, within the three-year statute of limitations.

Note, however, that you don't have to amend those filings. If you decide redoing old tax forms would provide only negligible tax advantage or you simply just don't want to mess with it, then you don't have to redo your taxes even though you now are considered federally recognized as married for those prior tax years.

Remembers, joint filing now means that in addition to getting many benefits afforded married couples that file jointly, that status also could put some same-sex spouses into marriage penalty situation.

So as in all things taxes, look at what your circumstances are when it comes to amending and what filing will work better for you and your spouse for old returns as well as future ones.

Taxpayers who wish to file a refund claim for gift or estate taxes should file Form 843, Claim for Refund and Request for Abatement.

More guidance to come: Treasury and the IRS promise more guidance is on the way. As it's issued, I'll post it.

But today's announcement is a major step forward for same-sex married couples. So celebrate your new equal tax status.

And call your tax professional!

No need to apologize and I'm glad you found me! Keeping track of all the states and their also constantly changing tax laws is a full-time job!

Sorry - just found this blog in a web search, and I wasn't sure if Texas was a state that had state income taxes. I could have said some other state. I actually looked for anything on tax status in Texas, and only found something about business taxes. I assumed that I was just looking in the wrong place.

Still - this is going to get interesting seeing all the hoops people will have to go through to file a state return given the disconnect between filing status. Even with fake married filing jointly returns it probably got interesting with things like deductions not meeting the standard deduction threshold for the real single federal returns, but becoming a factor in the fake joint return. And when people are making donations and advising with tax planners, how a state treats their donations is going to be fun to watch. As it stands, these states simply don't accept that other states have same sex marriage, but not they have to at least think about it in terms of how the rectify the disconnect with a married filing jointly federal tax status.

y_p_w you make a very good point and I'm working on a story on this. Bottom line is the hassle with federal filing that same-sex married couples used to have to do now will happen in states that don't recognize the marriages. The spouses will have to do fake single federal returns to use as the basis for their state filings. The IRS is expected to issue additional guidance; we'll see how much it deals with the state complications. Also, just FYI, no income tax in Texas, so the hypothetical couple would be fine here as far as taxes. :)

Just curious, but has there been any talk about how states will treat this? I was under the impression that common-law marriage didn't necessarily transfer to another state for IRS filing purposes, but apparently it has for 50 years.

So let's say a SS couple gets married in California and moves to or actually lives in Texas. The IRS directive now says that the couple can file jointly. Obviously Texas doesn't recognize that marriage and the tax authority will require the couple to file two returns as single. In most states they need to include a copy of the federal return or send an electronic file of the federal return.

They're going to have to do something because of the disconnect in federal and state treatment of filing status. I know in California, registered domestic partners and same sex married couples (from when SSM was legal in California) were asked to send in their federal returns along with a pro forma calculation of what their federal return would be like if the IRS recognized their partnership for tax purposes. I'm not sure if there is anything that can be done for the opposite.