Last week's (Aug. 15) jobless report from the Department of Labor showed initial claims for unemployment at a seasonally adjusted 320,000. That was the lowest level since October 2007, two months before the recession officially began. 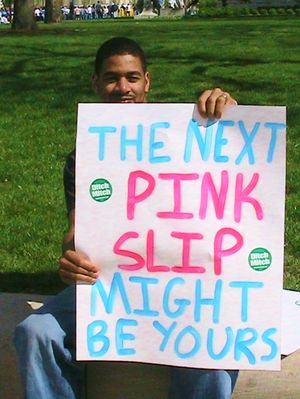 Hiring, however, remains sluggish. Companies are laying off fewer workers, but they aren't in a hurry to hire new workers. Payrolls increased by only 162,000 in July.

That means that lots of folks still rely on unemployment benefits. These payments come from a federal-state program that's funded in large part by the federal unemployment tax. Per the Federal Unemployment Tax Act (FUTA), employers -- and employers only, not workers -- currently pay the unemployment tax at a rate of 6 percent of employees' covered wages.

That wasn't enough, however, for many states. To cover the amount of unemployment claims, programs in 32 states had to borrow money from Uncle Sam.

Those shortfalls and ensuing loans now mean that employers in some of those jurisdictions could face higher unemployment tax rates.

FUTA tax rate reduced by credits: To offset the 6 percent FUTA tax, companies usually can claim credits of up to 5.4 percent, producing a net FUTA tax rate for most employers of 0.6 percent.

Those credits, however, are limited in cases where a state is a long-term borrower to cover unemployment benefits.

When a state doesn't pay off its unemployment loan, the FUTA tax rate for its employers increases by 0.3 percent beginning with the second consecutive Jan. 1 on which the loan isn't repaid. An additional 0.3 percent hike is added annually thereafter.

Tax analysts at Thomson Reuters Checkpoint warn that effective FUTA tax hikes could happen to employers in 17 states, as well as in the U.S. Virgin Islands. Those states (and territory), says the tax information and services provider, have had an outstanding federal unemployment insurance loan for at least two years.

That state total -- 17 -- where companies face higher FUTA taxes unless the states repay their loans by Nov. 10 (good luck with that) also is this week's By the Numbers figure.

Efforts to repaying FUTA: Thomson Reuters' examination of the FUTA loans did find that South Carolina has made a $144 million early payment toward its outstanding federal unemployment insurance loan. The Palmetto State plans to make an additional $50 million payment in September.

California also is looking to get off the FUTA long-term loan list. As I reported last week at my other tax blog, the Golden State is exploring ways to pay back the $10 billion it borrowed from Uncle Sam to cover unemployment claims.

California Gov. Jerry Brown's goal is to erase the FUTA debt by 2016 and also bank an $11 billion cushion for future unemployment benefits to Californians who lose their jobs.

That's a laudable goal and California already has made major strides, largely because of state tax increases, in getting its books in better order. But as I said earlier, good luck with that.

Also over at the Bankrate Taxes Blog last week, I blogged about another unfortunate personal situation with tax implications, when a spouse files an incorrect tax return. In joint filing situations, both husband and wife are responsible for any tax due or subsequent penalties from bad filings.

In some cases, a spouse who is unaware of the problem might be able to get some type of innocent spouse relief. That should be even easier for those seeking equitable relief from spousal tax bills now that the Internal Revenue Service is providing more time (up to 10 years) to apply for innocent spouse relief.

You can usually find Bankrate tax musings on that website each Tuesday and Thursday. If, however, you have a busy week (I know just  how you feel!) and miss those posts, you can check here at the ol' blog the next weekend, where you'll find a summary and links.