Werfel does his own tax returns, Lerner still under fire and other tidbits from House hearing on IRS small business audits 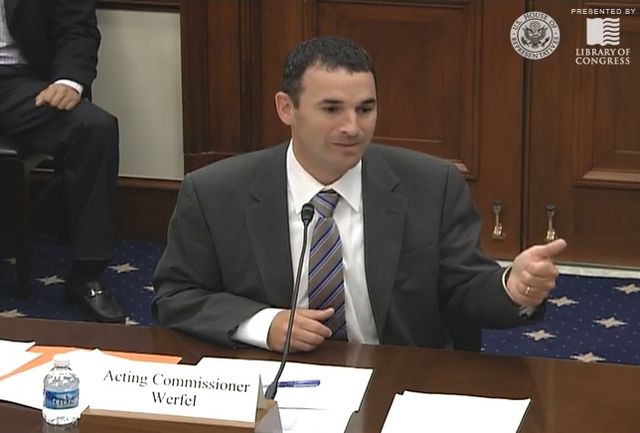 Click on image to view the Ustream recording of the hearing (starts around 1:01:17 p.m. mark).

The hearing was called to look into whether the questionable procedures used by the IRS in reviewing applications for 510(c)(4) tax-exempt status were also used in other agency divisions. Specifically, Committee Chairman Rep. Sam Graves (R-Mo.) wanted to make sure the IRS doesn't audit small business tax returns based on an owner's political persuasion.

Since the House and therefore its committees are under Republican control, it's no surprise that the focus was on the possibility that conservative business owners' filings are pulled more than others for audit.

What will get you audited: Werfel provided a primer on the examination (that's what the IRS likes to call it instead of audit) process.

After receiving a return, it gets an upfront review that is mostly automated. The return's math is checked (and corrected, followed by a notice to the taxpayer) and other indicators of potential fraud or noncompliance are flagged.

The biggest tool here, noted Werfel, is the Discriminate Information Function, or DIF. This is data that compares the return to average deductions in common areas and where compliance has in the past been a problem. The DIF rating scores the probability that a return contains inaccurate information and if so, it is flagged for potential added examination.

The IRS also uses third-party data it receives, such as payments made to the taxpayer and reported on 1099s. Any material anomalies here, noted Werfel, could trigger a correspondence or a field audit.

As for bank account information where it might be evident that a taxpayer made a large donation to a particular candidate, Werfel said "no, we don't see bank accounts" during the stage in which a return is examined for possible further inquiry.

IRS role in Obamacare: Several members of the committee had questions about the recent Obama Administration decision to postpone the Affordable Care Act (ACA) penalty on businesses that don't provide medical insurance coverage to their employees.

Some of the inquiries were quite specific, posed either to demonstrate the complexity of the impending law or to trip up Werfel or to make points with the constituents who brought the questions to the Representatives' attention.

Or it could have been a combination of the three possibilities, as apparently evidenced by Rep. Chris Collins' (R-N.Y.) reply when Werfel deferred answering a question about guidance on what constitutes a full-time employee: "So the acting IRS commissioner doesn't know the law that I have people lined up in my office asking about?"

Other committee members got in shots at the ability of the IRS to handle the various ACA, aka Obamacare, rules in light of the missteps made in conducting expensive out-of-town conferences and making Star Trek and line-dancing videos.

Lois Lerner under fire in abstentia: Werfel also was asked about Lois Lerner, the former head of the tax-exempt division where the spate of IRS scandals originated in May.

This is the latest instance of Lerner being invoked by members of Congress as the embodiment of IRS' current management ills. She best be on the lookout for buses when crossing the street, because I suspect she'll soon be under one.

Rep. Mick Mulvaney (R-S.C.) expressed his amazement, having spent his professional life in the private sector, that federal employment laws have prevented her from being fired. She has been placed on paid administrative leave.

And Rep. Blaine Luetkemeyer (R-Mo.) told Werfel that he had information, which he had shared with Treasury Secretary Jack Lew (Werfel's boss), indicating that Lerner "had a political bent. She was trying to target conservatives. Furthermore, she let liberal groups get away with not enforcing the [501(c)(4) tax-exempt organization] law."

Luetkemeyer was upset that the reported lack of enforcement situation was not addressed in Werfel's previously released 30-day report on issues of concern within the IRS.

It was not in the report, said Werfel, because "I am not aware of the evidence that supports your conclusion." Luetkemeyer promised to provide it to the IRS chief.

Werfel's personal tax filing: But the biggie, at least as far as everyone who's ever struggled with filling out a Form 1040, is that Werfel does his own annual returns.

Werfel also revealed -- in connection with another question regarding the quality of responses that IRS employees provide taxpayers (the answers are not guaranteed to be accurate, in case you were wondering) -- that he uses tax software.

He would not, however, name the product because "I don't want to give a preference."