The many U.S. tax breaks for your little prince or princess 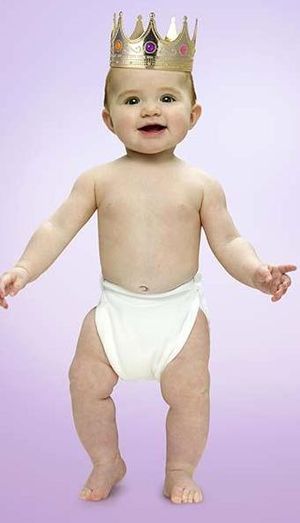 Congratulations to the new royal parents on the arrival of the future king of England.

Kate Middleton, officially known as Catherine, Duchess of Cambridge, delivered an 8 pound, 6 ounce son at 4:24 p.m. today local time, 11:24 a.m. Eastern time here across the pond. The proud father, Prince William, the Duke of Cambridge, was in the delivery room.

As for the royal heir's name, Buckingham Palace issued a statement that it would be announced "in due course."

Even though we Americans vehemently rejected the monarchy 237 years ago, we remain fascinated by the modern royal family. And I suspect the new prince's name will be popular among U.S. parents welcoming their own bundles of joys in the coming weeks and months.

Unless, of course, he's named Alfred. No offense to any readers with that name, but when I hear Alfred, I immediately think Batman's butler. And while I love that character (and especially Michael Caine's portrayal), it just doesn't work for me.

While U.S. kiddos won't be granted the aristocratic privileges of His Royal Highness, the Prince of Cambridge, there still are several Internal Revenue Code provisions that offer some royal child-related tax breaks.

Added exemption: A dependent youngster is an added exemption for his or her parents. This means the taxpaying parents get an added dollar amount -- $3,900 for the 2013 tax year -- for each child, helping reduce adjusted gross income to a smaller taxable income amount.

Child tax credit: The youngster's parent then get to claim the child tax credit. This is $1,000 per child and can be claimed by the parents until the tax year in which the kiddo turns 17. Of course, there are some requirements and limits.

Married couples who file jointly and make more than $110,000 will see the child tax credit start phasing out. The income threshold is $55,000 for married taxpayers filing a separate return and $75,000 for all other filing statuses.

The child, too, must meet some qualifying tests. The IRS has an online interactive tool to help families make sure they can claim the child tax credit.

Because this is a credit, it means that the $1,000 is deducted from the parents' tax bill dollar for dollar. Unfortunately, it's not a refundable credit, so it can only zero out any tax the parents owe.

But in certain cases, the credit might be able to produce a refund if you're eligible for the Additional Child Tax Credit. The online child tax credit tool will provide guidance if you qualify for this refundable credit.

Adoption tax credit: If your family grows via adoption, there's a tax credit for that, too.

While this tax credit is no longer refundable, it still can provide in 2013 up to $12,970 per child to help cover reasonable and necessary adoption costs. This includes such things as travel expenses, court fees and legal costs.

There are some income limitations based on a family's earnings. The credit will begin to phase out for families with modified adjusted gross incomes in 2013 that exceed $194,580. The adoption credit disappears completely for those with incomes of more than around $234,580.

And while the credit isn't refundable, any unused portion can be carried forward for up to five additional years.

Child care costs: When parents work, many must pay someone to look after the kids. The child care tax credit can help offset some of those expenses.

Expenses for after-school care count toward the child tax credit, as do the costs of summer day camp.

If you hire an in-home child care giver, however, don't forget about the nanny tax.

Help at the office: If you own your own business, hiring your kids can be tax smart. If you hire your children as employees to do legitimate work in your business, you may deduct their salaries from your business income as a business expense.

And if your child is under 18, in most instances you won't have to withhold or pay any Social Security or Medicare, that is, FICA, tax on the young workers' salaries.

What's in a name? OK, I can't let the name of the new prince go just yet. Now that we know it's a boy, the birth date and time, weight and the like, Great Britain's bettors are waiting to see if their name selections will pay off.

William and Kate aren't likely to wander down a wild naming route, so don't hold your breath for a directional moniker a la Kimye's daughter North West.

The safe money is on a moniker that's already appeared often in the royal family tree. Dictionary.com's The Hot Word blog takes a look at what some of the top royal baby name contenders mean. Although we'll have to wait for the second child of the Duke and Duchess to see if any of the girls' names apply, it's still fun to learn what they mean.

And if you'd like to be King or Queen for a day, I, the Grand Empress Athena the Pleasant, give you a way to royally redub yourself via the royal name generator.

This is a great post! It had me smiling all the way. And the beginning of your article is a great hook! And the list of child tax breaks is great too.