The chairmen of the House and Senate tax-writing committees agree that overhaul of the huge and complicated U.S. tax code has a good chance of passage.

Rep. Dave Camp (R-Mich.), head of the Houses Ways and Means Committee, and Sen. Max Baucus (D-Mont.), leader of the Senate Finance Committee, each put the possibility of tax reform passage at greater than 50 percent.

The gung-ho comments were made during an appearance today at the Economic Club of Washington. 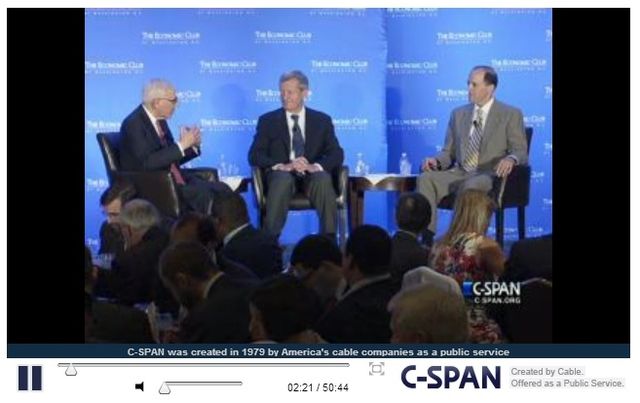 If you've got around 51 minutes to kill, click on the C-SPAN image above (Audio alert: the video will start as soon as the page loads) and watch Baucus and Camp yourself.

"We're on track," Baucus said, adding that President Obama is "engaged" in the tax reform effort. "I spoke to him yesterday."

Baucus' and Camp's remarks before a group of lunching D.C. tax and policy wonks was the duo's latest effort to talk up tax reform.

Road trip! Earlier this month the tax-writing chairmen visited two companies in the Minneapolis-St. Paul, Minn., area to find out what changes outside-the-Beltway taxpayers would like to see to the Internal Revenue Code.

It was the first in a planned series of nationwide stops to talk about tax reform. And both men said the visits to 3M headquarters and Baldinger Bakery confirmed their belief that there is strong grassroots support for revamping the tax code.

I'm looking forward to seeing what happens at their next destination, which they announced via their tax reform Twitter account @simplertaxes:

The big question is exactly where in Philadelphia will the tax chairmen go? There aren't any details yet on their tax reform website.

But I also want to know if they'll get a mascot, say the Philly Tax Phanatic.

And most importantly, how badly will Baucus and Camp be booed by the residents of the City of Brotherly Love?