America's battle for independence from Great Britain was propelled in large part by our battle against unfair taxation. Since that's part of our national DNA, it's no surprise that the fight continues in 2013. 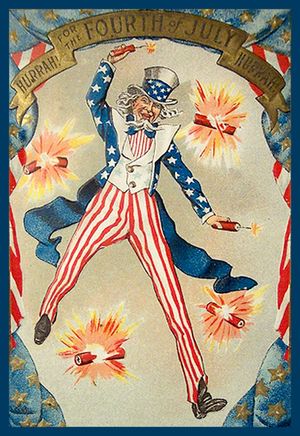 So today, the 237th birthday of our nation, here are some tax facts, courtesy the Tax Foundation, to consider.

The top marginal income tax rate in 1913, the first year the modern income tax was levied, was 7 percent.

Today's top tax rate, thanks to the American Taxpayer Relief Act (aka the fiscal cliff tax bill) signed into law in early January is 39.6 percent. That will be paid by individuals making $400,000 or more.

But before you start to complain about the increase from a 7 percent top ordinary income tax rate in 1913 to almost 40 percent in 2013, note that our parents and grandparents had to deal in 1944-1945 with the highest-ever marginal tax income rate, 94 percent.

Remember, this was during World War II and back then there was more acceptance of everyone pitching in to help the war effort.

That attitude has been echoed recently in calls for everyone to pay their fair share in taxes. But nowadays there is much debate as to what constitutes fair.

Tax rate inequity: Is fairness measured by individual tax rates and the real effective rates that we all pay?

If so, many argue that it's incredibly unfair that wealthy Americans tend to pay a smaller effective tax rate because of the type of income they receive.

That situation got much attention during the 2012 presidential campaign thanks to Warren Buffett's admission that his tax rate was lower than his secretary's and Republican presidential candidate Mitt Romney's two years of tax returns showing that he paid an effective tax rate of around 14-to-15 percent.

But others say tax fairness should take into account how much various taxpayer segments contribute to the U.S. Treasury.

The Tax Foundation notes that in 1980, the top 1 percent of taxpayers accounted for just more than 19 percent of all federal income taxes paid. Thirty years later, that tiny group of wealthy taxpayers paid more than 37 percent of the overall taxes collected.

At the other end of the earning scale, says the nonprofit Washington, D.C., tax group, the percentage of federal income taxes paid by the bottom 50 percent of all taxpayers in 1980 was 7.05 percent. In 2009, that percentage had dropped to 2.36 percent.

Remember, however, there are many other taxes paid in addition to income taxes.

And while the poor don't contribute as much dollar-for-dollar to Uncle Sam's bottom line as do the wealthy, folks who don't make very much money are disproportionately affected by sales and property taxes because those levies aren't tied progressively -- that is, rates increase as income grows -- to income levels.

Celebrate now, taxes later: What's that? Right now you'd much rather have another plate of barbecue and a frosty beer than debate tax policy.

Sorry. The tax geekiness took over a bit.

I totally get you. You're right. This is July 4, a holiday, America's holiday. We can resume the tax fairness debate next week.