States could get more money by modernizing sales tax laws 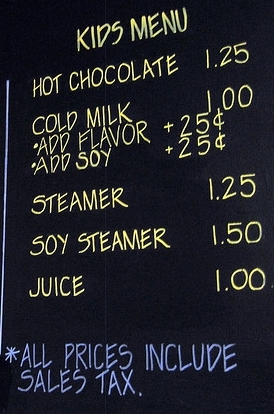 But a Washington, D.C., think tank says that too many states still have antiquated sales tax laws that are preventing their economies from growing.

The Center on Budget and Policy Priorities (CBPP) notes that sales taxes account for nearly a third of the tax revenue that states collect. States use this money to help pay for education systems, transportation networks and a range of other public initiatives.

But simply increasing sales taxes won't work. Although the median state sales tax rate is almost twice as high now as it was in 1970, CBPP says it's not enough.

"States won't be able to make these investments and sustain them over time without modern revenue systems that can raise adequate revenue as today's economy expands," say CBPP analysts Michael Leachman and Michael Mazerov in a new report "Four Steps to Moving State Sales Taxes Into the 21st Century."

As the report title indicates, Leachman and Mazerov say that states instead should focus on modernizing their sales tax systems to address how money is made and spent in a 21st century economy.

1. Broaden the tax base to include more services.
Household spending has been shifting from goods to services for decades, notes the CBPP, yet most states haven't updated their sales taxes to reflect this fact. This is costing states tens of billions of dollars each year.

2. Enact an Amazon tax.
States and localities lose more than $20 billion a year in uncollected sales taxes that are legally due on online purchases but that retailers aren't required to collect, according to CBPP.

The giant retailer for which these so-called Amazon taxes are named supports federal legislation to require tax collection by all online sellers. However, that legislation, the Marketplace Fairness Act, is languishing in the U.S. House.

In the meantime, says CBPP, states can chip away at the problem on their own. The remaining states that collect sales tax could enact laws requiring large online retailers to collect taxes on sales in their states.

3. Extend the sales tax to digital downloads.
Twenty-three states don't tax the sale of computer software, music, movies and various other goods delivered on the Internet even though they tax the same items when sold in physical stores. CBPP says that different application of the sales tax costs the states around $300 million a year.

4. Close the online hotel tax loophole.
CBPP counts 42 states that still have a tax loophole allowing online travel companies like Expedia, Orbitz and Priceline to collect taxes on only part of the sales taxes due on hotel room bookings. This costs states and localities roughly $275 million to $400 million each year. 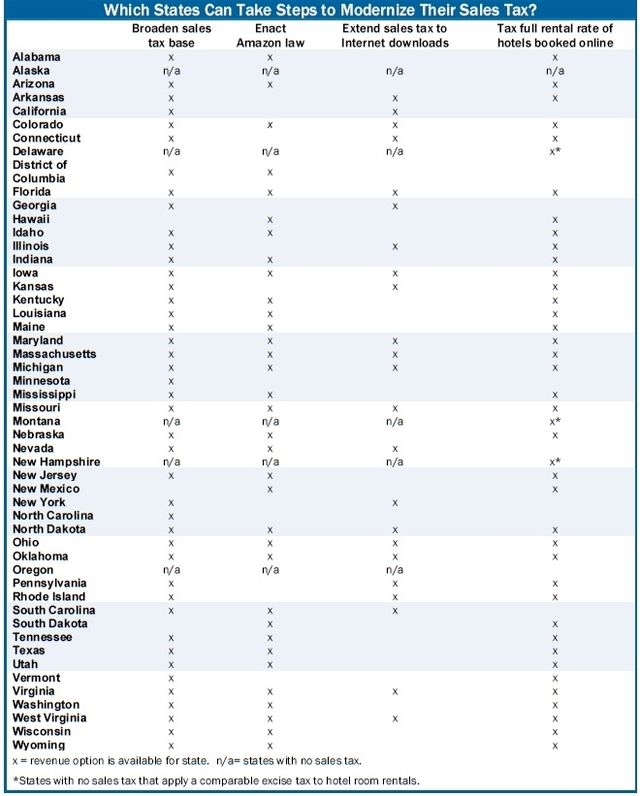 While over the long term sales taxes don't grow with the economy as much as personal income taxes do, sales taxes have the revenue advantage of not declining as much when a recession hits.

"As such, including sales taxes in the mix of state taxes is somewhat like having a diversified portfolio of investments," says CBPP. "In combination with faster-growing but somewhat more volatile income taxes (and other revenue sources), they can help states raise adequate revenue that remains relatively stable during good times and bad."

But to do the best possible job, CBPP says most states' sales tax systems need to catch up to the types of sales in today's world and how they are made.