Senators' tax reform suggestions to be kept secret until 2064 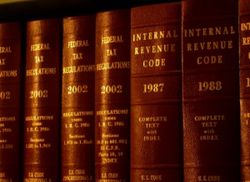 By the end of today, we should know what tax laws U.S. senators think should remain (or be added to) the Internal Revenue Code.

We just won't know which senator suggested what.

Specific attribution of the various tax code rewrite recommendations will be kept secret for the next 50 years.

That's right. Lawmakers apparently are so afraid of being tied to actual tax laws, they've been guaranteed that they won't be linked to their suggestions, at least not while they are likely to still be serving in the Senate.

Talk about no courage of their convictions.

Blank, anonymous slate: This so-called blank slate tax code overhaul process began about a month ago. Basically, the idea is to do away with most existing tax breaks in exchange for lower tax rates.

On June 27, Sen. Max Baucus (D-Mont.), the chair of the Senate tax-writing committee, and Sen. Orrin Hatch (R-Utah), the ranking minority member on the panel, sent their fellow senators a Dear Colleague letter asking for their input on how to clear out and fix what they called America's broken tax code.

The deadline for the suggested changes is today. I suspect that most senators have approached the request like high school kids waiting until the last minute to turn in their homework.

But we won't know for sure who got their essays tax reform proposals in on time because, despite original plans to make all the change suggestions public, Baucus has decided instead to keep them secret.

"We're totally protecting confidentiality," the Finance Committee chairman told Tax Analysts in mid-July. Baucus said he made the decision to not publicly release the tax reform proposals his fellow Senators submit because "we'll get more candid submissions that way."

Of course, lawmakers are free to publicize their suggestions if they wish.

Sealed until 2064: The tax reform secrecy component was formalized in a July 19 memo to fellow senators.

In that communication, Baucus and Hatch assured other senators that any tax change submission the committee leaders receive will be kept under lock and key by the committee and the National Archives until the end of 2064. 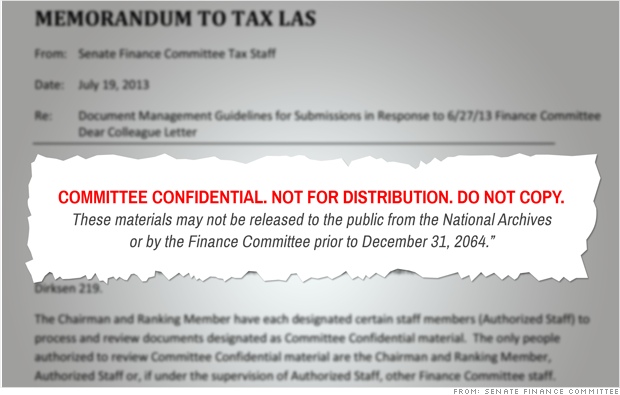 In addition, only certain staff members, 10 in all, will get direct access to the written suggestions from the participating senators. Each submission will also be given its own ID number and be kept on password-protected servers, with printed versions locked in safes.

Will Baucus, Hatch and the selected Finance staffers be able to keep everything on the down-low? Lucky for them, former National Security Agency contractor-turned-hacker Edward Snowden has other things on his mind right now.