Sergei Magnitsky, a lawyer who was jailed for his part in revealing alleged collusion between Russian mobsters and government officials in a $230 million tax rebate scheme, was himself convicted this week of tax evasion. 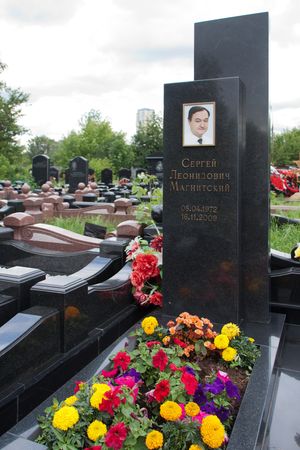 There is, however, one key thing to note about the Russian court's decision. Magnitsky died in 2009 at age 37 of pancreatitis while he was held in the Butyrka prison in Moscow.

Magnitsky's death prompted widespread global criticism from human rights activists who said he that he had been beaten and deliberately denied medical treatment.

Following his allegations, Magnitsky was arrested and charged with the very crimes he said he had uncovered. Russian officials denied that Magnitsky was a whistleblower who revealed tax corruption, calling him instead "a common corporate accountant or lawyer who served his boss."

More than taxes: Magnitsky's imprisonment had ramifications beyond the tax arena.

The United States adopted the "Magnitsky List" that bans officials involved in the alleged fraud from entering the U.S. or keeping bank accounts here.

Moscow retaliated by banning Americans from adopting Russian children and calling for the closure of Russian non-governmental organizations that receive American funding.

In announcing the guilty verdict, Tverskoy District Court Judge Igor Alisov said, per an ITAR-Tass news agency report, that "Magnitsky masterminded a massive tax evasion scheme in a ... conspiracy with a group of people."

The court also found Browder, who now lives in London, guilty in abstentia of tax evasion and sentenced him to nine years in jail.

The reaction outside Russia was much less sanguine.

"This sham court case was reminiscent of the worst days of Stalin's show trials," Dominic Raab, a Conservative British Parliament member Dominic Raab, who supports a British version of the U.S. Magnitsky list, told the London newspaper The Telegraph. "It shows the endemic corruption and cruelty of President Vladimir Putin's regime."

Another whistleblower in Russia: And the timing of the Magnitsky trial also might cause some pause for another self-proclaimed whistleblower.

Edward Snowden, who fled the U.S. after revealing the extent of National Security Agency information collection on American citizens, has been holed up for nearly three weeks in the international transit zone at Sheremetyevo Airport in Moscow.

If he's allowed to stay, he might look into also hiring a good Russian tax attorney.