It's always a pain to get a place ready to sell. But tax officials are facing some special problems in the upcoming auction of a rural New Hampshire property.

The 103 acres previously owned by a pair of militant septuagenarian tax protesters could be loaded with booby traps. 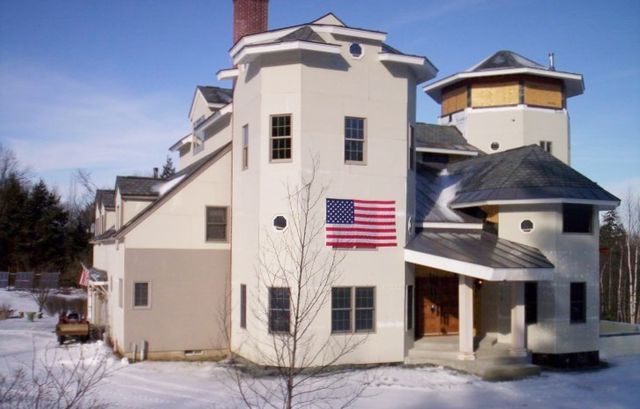 The potentially deadly home of convicted (and jailed) tax protesters Ed and Elaine Brown will soon be on the auction block. Photo courtesy InfoWars.com.

Mikelson is in charge of the auction of the Plainfield, N.H., compound where Ed and Elaine Brown, armed to the teeth, held off law enforcement officials for months.

Hunkering down: The couple refused to recognize or comply with federal income tax laws. After being sentenced to five years each in prison in 2007, they refused to go to jail, opting instead to use their vast arsenal to hold off federal agents who came to arrest them.

After nine months, the pair finally was taken into custody peacefully. In addition to the original tax evasion charges, the duo was convicted in 2009 of amassing weapons, explosives and booby traps and of plotting to kill the law enforcement officials who came to arrest them.

Dangerous collection: And now the U.S. Treasury and local tax collectors want to get the Browns' unpaid tax money by auctioning off their property.

So when the auction notice finally is released, it will make it clear that land mines might be planted on the property.

Federal marshals are refining the disclaimer language. The auction isn't expected to occur until September.

Prospective buyers won't be allowed on the grounds until their bid wins. They also must agree to not hold the government liable for dismemberment or death caused by potential armaments on the land.

The Marshal Service looked into preclearing the property by using the services of fellow government agencies that have explosive detection equipment and dogs. However, none of the offices could ensure a clean sweep.

Also being auctioned is Elaine Brown's dental office in West Lebanon, N.H., also will be auctioned. The starting bid for the commercial property is $507,500.

And while the office building is not considered deadly, officials still had to deal with privacy issues and dispose of patient records left behind.

If the properties sell, the first creditors to be paid would be the municipalities of Plainfield and Lebanon, which are owed back property taxes.