IRS made mistakes on interest due from some taxpayers

Everyone makes tax mistakes, even the Internal Revenue Service.

That was again made clear earlier this month when the IRS sent some taxpayers and tax professionals notices that included an interest calculation error.

The math mistakes were on CP 2000 notices mailed out the first two weeks of July and which dealt with proposed taxes due on unreported income.

The IRS says the interest amount calculated on that new unpaid income amount was too low. 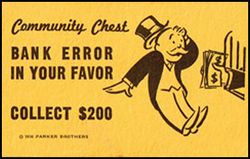 Sorry recent CP 2000 recipients. I wish I could tell you, to borrow a Monopoly board game phrase, that the IRS error was in your favor.

Such IRS changes generally are based on the agency's comparison of the income, payments, credits and deductions reported on the return with information on those items that it gets from third-party reporting. This is, for example, W-2 data from employers and 1099s from banks, businesses and other payers of income and investment earnings.

When the IRS determines that you owe more than you originally calculated, the CP 2000 includes the amount of added tax due based on the revised information and any interest accrued on the unpaid amount.

By sending out this notice, the agency simply is telling taxpayers what it thinks a return should include and asking the taxpayer to take a look at what was originally reported on the 1040.

If you get a CP 2000, you get a chance to tell the IRS why you think your numbers are correct despite the third-party data the agency got.

This could be, for example, an original W-2 or 1099 that contained incorrect data and a corrected form wasn't issued to either the taxpayer or the IRS. But you have documents substantiating the amounts you put on your tax return.

So a CP 2000 is only a proposal that offers you an opportunity to disagree, partially agree or agree with the IRS' proposed changes, which could include proposed added interest and penalty charges.

Corrected notices will be in the mail: Folks who got erroneous CP 2000s the weeks of July 1 and July 8 will get their chance to review and, if appropriate, rebut the IRS proposed changes.

The IRS says it will be sending later this month a special mailing to folks who got the previous incorrect CP 2000s.

So when you get the subsequent notice, follow the directions included in the correspondence, which the IRS says will include a special toll-free number or a mailing address that recipients can use to receive the corrected interest amount.