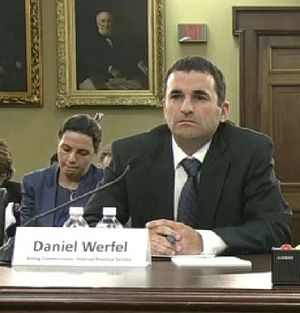 Committee Chairman Rep. Sam Graves (R-Mo.) called the hearing to jump on the whack-the-IRS bandwagon ensure that the IRS isn't cherry-picking small business tax returns for added examination based on their political leanings.

This is the latest in tangential Congressional inquiry into the IRS following the Treasury Inspector General for Tax Administration report that groups, progressive as well as conservative, had their applications for 501(c)(4) tax-exempt status pulled for extra scrutiny based on be on the lookout, or BOLO, lists.

I'm hoping Graves et al will explain how they think this political preference targeting might work. Unless a company is named Go GOP Forever or Long Live Dems, it looks like such an effort would be more trouble than it's worth. We shall see.

As we wait for the hearing, the Committee has released Werfel's prepared testimony. As a preview, here are some items of note:

You can tune into the livestream of the hearing, which starts at 1 p.m. Eastern time, to find out exactly what additional info Graves and his colleagues want from Werfel.