Buffy, taxes and a confusing, for a tax geek, headline

You know you are a beyond-all-hope tax geek when you see a headline like the one below and immediately think "Why did Buffy hire a ringer to do her taxes and what exactly is a tax ringer?" instead of realizing that the story is using one of the other possible, non-IRS meanings for "taxing." 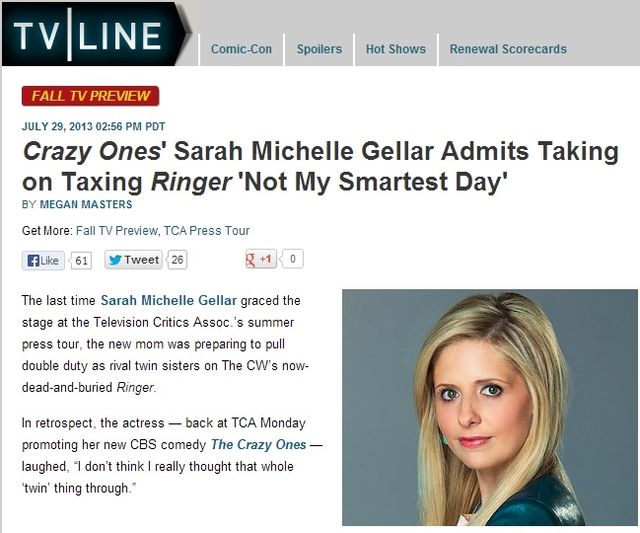 Tax Forum focus: In my defense, it's been a long day. Who can tell me why every road in North Texas is under construction?

But, despite road crews' and detours' best efforts, I'm finally settling into my hotel room just outside of lovely Grapevine, Texas, where for the next few days I'll be attending an IRS Nationwide Tax Forum.

Those of us at this event -- there are four left this summer, in New Orleans, Atlanta, Washington, D.C. and San Diego, where I went last year -- got word late Friday that acting Internal Revenue Service chief Daniel Werfel will speak tomorrow.

I'm not expecting any major revelations, but you never know.

It was, after all, at an American Bar Association event where former IRS Exempt Organizations division head Lois Lerner revealed the agency's now under assault 501(c)(4) application screening process.

So I'll definitely be at Werfel's session. I'll let you know what he has to say, momentous or not.

More TV tidbits: If, like me, you also are a diehard vidiot -- or just a Buffy and/or Mork fan -- below is the trailer for Gellar's new CBS fall comedy, "The Crazy Ones," in which Robin Williams plays her TV dad.

My favorite thing about the show, having seen only the clip above, is that the cast of the ad agency-based series includes James Wolk, better known to Mad Men fans (me, me, me!) as the mysterious Bob Benson.

That's either inspired or gimmicky casting.