Yet another high-profile marriage apparently is about to end in divorce. Media mogul Rupert Murdoch has filed for divorce from Wendi Deng, his third wife of 14 years. 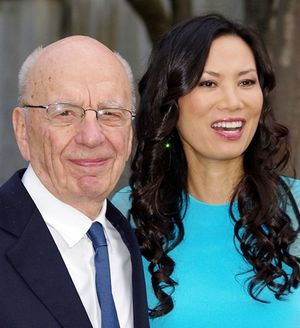 The 82-year-old head of News Corporation and his 44-year-old wife are the parents of two young daughters.

Expect the breakup to be messy. Murdoch is worth a reported $11.2 billion that comes from News Corp, corporate parent of, to name a few, Fox News, various entertainment TV outlets, a film studio and a publishing empire that counts the Wall Street Journal among its holdings.

Both Mr. and Mrs. M have high powered lawyers and forensic accountants to guide them through the break-up of the marriage and assets.

We regular folks, however, usually can't afford such specialized help. That means we ourselves need to pay a bit more attention to the possible financial and tax consequences when a marriage can't be saved.

And everyone who goes through a divorce, regardless of how rich or poor, must pay attention to the same rules when it comes to federal taxes.

I hope your relationship is strong and happy and you never have to think about this, but just in case, here are some divorce tax tips.

Timing: Your tax filing status is determined by your marital status on the last day of the tax year. If you are still legally married on Dec. 31, then the Internal Revenue Service considers you to be married for that tax year.

As such you have two tax filing choices, married filing separately or married filing jointly. If your split is mutual and amicable, it might be worth continuing to file jointly. This filing status typically provides better tax breaks and rates that each partner filing a separate return.

Remember, however, that when you file a joint return, both partners are jointly and severally liable for any taxes owed. That means that if Uncle Sam determines there's a problem with the return the husband and wife signed, even if it's because of the acts of one spouse, both husband and wife are liable for the bill and the IRS can come after each or either for the money.

So if finances are part of the reason you're splitting, you might want to the file a separate return. It might cost you a little more in taxes right now, but it could prevent tax troubles connected to your ex down the road.

When you file separately and minor children are involved, the spouse with whom the kids lived for more than half the year can claim them as dependents.

And if you and your soon-to-be-ex spouse lived apart from each other for the last six months of the year, even though you are technically married you may be able to file as head of household if you've been taking care of the kids during the split.

Head of household is more tax beneficial than filing separately. You may be able to claim the earned income credit and certain other credits and your standard deduction will be higher. But you must meet certain requirements, so check with your tax adviser about the rules.

Post-divorce status options: The end of year determination also applies when your divorce is final. If your divorce decree is issued on Dec. 31, then you are a solo filer for that full year.

If you don't have kids or your children are no longer your dependents, then you'll file as a single taxpayer.

But if you have dependent children, then you can use the previously noted more tax advantageous head of household filing status.

Generally, divorced parent who has physical custody of the kids gets to claim them and any associated child tax breaks. However, the custodial parent can allow the other parent to claim the kids. In that case, Form 8332 must be filed.

Alimony, child support and tax deductions: Alimony and child support are part of most divorces. And each is treated differently for federal tax purposes.

Alimony has tax consequences for both the payer and the recipient.

If you make support payments to your ex, you can claim that amount as an above-the-line deduction. Similarly, the ex receiving the alimony must count it as taxable income.

Child support, however, is tax neutral. It is neither deductible to the payer nor taxable to the recipient.

So pay close attention to how financial arrangements are structured in your divorce settlement.

Take the family home. A residence is usually the most valuable asset owned by a couple. In many cases, the ex-wife gets the property because she has custody of the kids and to avoid the further family disruption of a move away from friends and school.

But once she becomes sole owner of the property, her tax break when she does finally sell the house is dramatically reduced. A single homeowner can only exclude a maximum of $250,000 in home sale profit from taxation. If the home was sold before the divorce, the couple could have excluded $500,000 and split the money in the divorce.

Also consider the tax implications when splitting up investment accounts.

These are just a few highlights of the tax issues facing divorcing couples. So in addition to hiring a good tax attorney, also consider hiring an accountant or financial adviser with experience in divorce cases.

It might cost a bit more up front, but could save you valuable dollars once your divorce decree is final.

Photo of the Murdochs by david_shankbone via photopin cc