UPDATE, Dec. 22, 2017: Under the Tax Cuts and Jobs Act that became law in late 2017, you can no longer claim casualty and theft losses as itemized deductions unless your losses are the result of a federally declared disaster. This claim limitation is in effect through 2025. If you do meet the major disaster designation, you still will claim them using Form 4684 and then transferring the relevant data to Form 1040's Schedule A.

is in Shawnee and Moore residents are not thinking about taxes today. They're still trying to salvage what they can from the deadly tornadoes that ripped apart their central Oklahoma towns just more than a week ago. 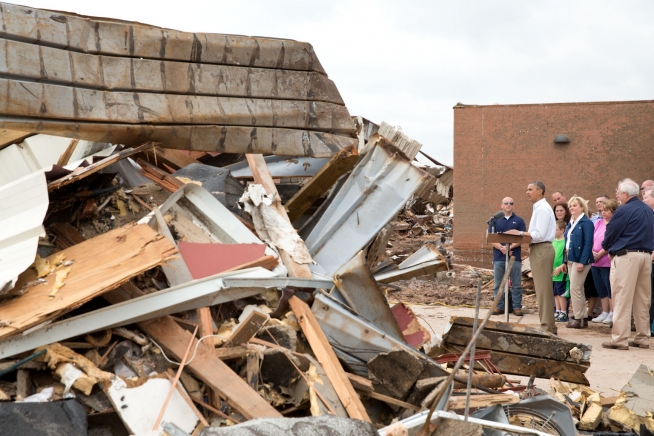 And they might have to be looking later today for storm-sturdy shelter as twisters are again forecast in the area, as well as into neighboring Tornado Alley states.

But when things finally do calm down a bit, folks who sustained storm damage in federally declared major disaster areas need to look at their tax situation. In these cases, they might be able to take advantage of special tax treatment that could net them added tax refund money now, instead of next filing season.

The mechanics of getting tax refund cash months early to help pay for critical repairs is today's Weekly Tax Tip.

And today, in the wake of the recent tornado outbreak and in advance of the upcoming Atlantic hurricane season, the Internal Revenue Service issued a reminder for folks to, among other things, keep a backup set of records (tax returns, as well as bank statements, insurance policies, etc.), preferably in electronic form, that can help in applying for storm relief programs.

Disasters abound: Unfortunately, there's no escaping disaster. That sad fact means that I've written many, many times both here at the ol' blog and on Bankrate about this special disaster tax benefit, and I use that word advisedly because I know there is absolutely no benefit connected to losing your home or business.

So if this post doesn't apply to you or your friends and family, I apologize for boring you.

But I also beg your indulgence. Not only is this important information for people who do need to file an amended tax return to get refund money ASAP to rebuild, but I also must admit to a personal fascination with the meaner side of Mother Nature.

Part of that is because my relatives seem to be disaster magnets, and I'm not just talking about feuding cousins at family reunions.

My parents survived the deadly 1954 Ozona, Texas, flash flood, precipitated, literally, by 24 inches of rain in 24 hours from Hurricane Alice moving inland. My dad, at my mother's screaming insistence, even was able to hook up their small mobile home and pull it to higher, dry land.

The Lubbock aunt was on holiday in Mexico City in 1985 when that city suffered a major earthquake.

My youngest aunt is still in Florida despite dealing with the aftermath of several hurricanes and tropical storms. She and her husband are hardier than the hubby and I. Two 'canes, Jeanne and Frances, within three weeks in 2004 drove us out of the Sunshine State and back home to Texas.

And since we've been here we've had our own brush with another type of natural disaster. On Labor Day weekend 2011 and for days afterward, we anxiously watched smoke rise from the neighborhood across the canyon west of our house where a raging wildfire was destroying other people's homes.

That fire near miss is as close to that kind of disaster as we ever want to be!

Here's hoping that all y'all also are able to avoid a hard hit when Mother Nature turns into Mommy Dearest.

But if you do ever encounter major natural disaster damage, be sure to use the tax code to your advantage to get as much help as you can.