If you've never worked in Washington, D.C., you have no idea of what's really important in the nation's capital. 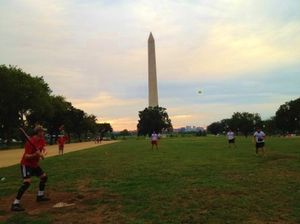 I am not kidding. Every year when the weather starts to warm up, the city's attention turns to softball.

The variation of baseball, with its larger ball, smaller playing field and 10th team member, is perfect for all of the city's power mongers.

If your hardballs in the halls of Congress don't produce a strike, you always can transfer your legislative, lobbying or bureaucratic frustrations to the D.C. athletic counterpart.

There are three leagues: Congressional, House and Senate. Only the Senate group requires that players work in that chamber. Teams in the other two leagues include employees from federal agencies, nonprofits and think tanks.

"With the pressure and pace of Congress, it's important to have a little recreation time," Gary Caruso, commissioner of the Congressional Softball League, told The Hill newspaper.

Softball goes big time: Yes, each league has its own commissioner. They have websites. And Roll Call newspaper blogs about the games.

That's a little more formal than the days when I was a member of the Wyche Sox, the team of staffers representing U.S. Rep. and then Sen. Wyche Fowler's office. But we still took the game seriously. 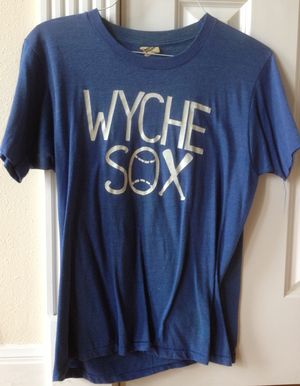 That's the hubby's "uniform" there to the right. Yes, Wyche represented Atlanta in the House, the full state of Georgia in the Senate and was a huge Braves fan. But we liked the play on the Chicago American League team's name.

Our softball exploits were so important that when all other qualifications were equal, office interns who could swing a bat got the edge. And yes, we had some women who were sluggers.

The young summer employees back then also were dispatched on game days to physically sit on fields to claim a good one for the upcoming matches. Now field reservations are made online.

Truth be told, I was more of a cheerleader. I know I was formally added to the team primarily because it allowed the hubby, with his .900 batting average (he swears that's what it was!), to piggyback onto the roster.

At a reunion of Wyche staffers in February, we fondly reminisced about some of the great and goofy games. Those events were as big a part of the Congressional experience as were pieces of monumental legislation in which our office played a part, such as the historic 1986 tax reform act.

IRS trouble spills onto the field: As the uber-organization of today's teams indicates, softball is still a really big deal in the District.

Sadly, though, it looks like at least one softball game has fallen victim to the political gamesmanship surrounding the Internal Revenue Service's mishandling of tax-exempt applications.

The IRS softball team, known as The Cheetahs, has canceled its Friday game against Senate Minority Whip John Cornyn's office.

The Republican senior senator from Texas told his players of the schedule change via his office's Facebook page:

A spokesperson for Cornyn confirmed the last-minute cancellation, but had no clue as to why the IRS team decided to bail.

Could it be because of Cornyn's fiery rhetoric earlier this week? On Tuesday, he took to the Senate floor to blast the IRS' added scrutiny of conservative nonprofits and compared the agency's actions to those of "corrupt tin pot dictators."

"We contacted them to confirm our game which was scheduled for tomorrow night, and they said they needed to reschedule," Cornyn spokesman Drew Brandewie told the Houston Chronicle blog Texas on the Potomac. "Guess they needed an extension."