The prospect of paying millions in state taxes was a key of the reason that a giant floating oil platform ended up beached off an Alaskan island at the end of last year. 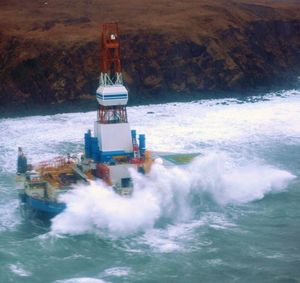 Before the Kulluk settled into the shallow water, the U.S. Coast Guard sent in a helicopter to rescue the drill ship's crew. A week later, with the help of the high tide, recovery crews refloated the Kulluk and towed the conical drill ship to safe harbor at Alaska's Kiluda Bay.

Maintenance and taxes, but mostly taxes: The ostensible reason for taking the Kulluk from its Dutch Harbor, Alaska, berth in December 2012 was to float it to a Seattle, Wash., shipyard for off-season repairs and general maintenance.

But the avoidance of millions in Alaska taxes also was a motivator, according to testimony last weekend during a Coast Guard hearing into the Kulluk incident. The Coast Guard is investigating the circumstances of the grounding. The findings could produce safety improvement recommendations. Investigators also could seek actions against the licenses of mariners involved.

Immediately after the Kulluk ran into trouble, Sean Churchfield, operations manager for Royal Dutch Shell in Alaska, had hinted that taxes were part of the decision to move the drill ship.

He flatly acknowledged the tax reason in sworn testimony May 26 before the Coast Guard panel in Anchorage. The Anchorage Daily News reported the exchange:

"Our preference for the timing was to be gone before the end of the year, driven by the economic factors," said Churchfield, with a Shell lawyer from the Blank Rome law firm at his side.

"Why specifically was the end of the year such a concern?" asked Lt. Cmdr. Brian McNamara of the Coast Guard Investigations National Center of Expertise.

"The end of the year to my understanding was when the tax liability potentially would have become effective," Churchfield answered.

Shell purchased the Kulluk in 2005 and the company has said it has invested $292 million in it since then. However, the company has never released how much it paid for the vessel or its assessed value.

Churchfield also said, the tax liability would have been greater than the other commercial factors involved in the decision to move the drill ship during a time of year when Alaska's weather is volatile.

The Kulluk reportedly also would have faced taxes in Washington if it had made it to the Seattle port. But since it didn't and was grounded within Alaska's borders on Jan. 1, it presumably owes the Alaska tax it was trying to avoid.

In January, Alaska's property tax assessor Jim Greely told the Alaska Journal of Commerce that he expects Shell to file a tax return. Greely said when that return is filed, he ask the state Attorney General for an opinion on the matter because of the unusual nature of the incident.

After the Kulluk's problems, Shell announced it would not conduct offshore drilling operations in the Alaska Arctic this year. Instead, it will repair and retool its rigs and prepare for future operations.

As for the Coast Guard, there's no indication of what it cost that U.S. Armed Forces branch to send out its rescue team to evacuate the Kulluk.