While the man who previously was in charge of the Internal Revenue Service was being lambasted by the House Oversight and Government Relations Committee on Wednesday, a new acting tax commissioner was settling into his office.

I wouldn't blame the former commissioner for thinking that perhaps Lois Lerner had the right idea when she chose not to testify! After two days of Congressional hearings, Shulman might just be in the running for this week's worst week in D.C. award. 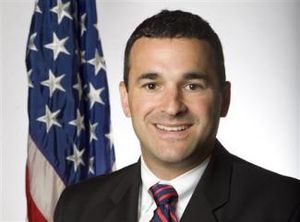 While the Oversight hearing was going on (and on and on), Daniel Werfel was spending his first day as the agency's acting commissioner. He steps in for Steven Miller, who resigned after asked to do so was fired, in the wake of the IRS controversy.

But his first task, at the direction of his boss Treasury Secretary Jacob Lew, is to perform a thorough review of the IRS and to report those findings to the president within 30 days.

That's a June 21 deadline if you want to mark your calendar.

A message to IRS staff: Before buckling down on the agency review, however, one of Werfel's first acts was to introduce himself to IRS employees.

Here is the first IRS agency-wide internal message from the new acting commissioner:

Team - As we start on a new journey together here at the IRS, I wanted to take a moment to talk about the path forward.

It has obviously been a difficult last few days for all of you. There is rightly concern among the public about the trust that they place in the IRS to administer the tax code fairly and help America's taxpayers understand and meet their tax responsibilities. Working together, it is up to us to restore that trust and ensure that the IRS remains the exceptional, indispensable organization it has always been.

The first step in this effort must be to get to the bottom of the recent allegations regarding the criteria to determine eligibility for tax-exempt status. The missteps uncovered in the recent Inspector General report are inexcusable and cannot be tolerated by any of us. We have a solemn duty to act as responsible, fair and impartial stewards of the taxpayers' dollars. As someone who has spent my entire career as a civil servant in government, this is a duty that I hold dear, and any deviation from it is unacceptable to me, as I know it is to you. That is why we must work together with the Inspector General, the Justice Department, and Congress to ensure that responsible parties are held accountable for the inappropriate activities that occurred and that we correct the breakdowns in process and oversight that allowed them to occur.

At the same time, we must keep our eyes on our critical missions of fair application of the tax laws and effective operation of the systems that fund our government. That mission, and your work, are of critical importance. With that in mind, in the coming days, I plan to begin a review of our operations, processes and practices to focus on how we deliver on our mission today and how we can make improvements in the future. The American people expect the IRS to operate efficiently, effectively, transparently and with the utmost accountability to the taxpayer. And where that is not the case, we will take swift actions to correct it.

"Particularly at this time, we have an indispensable role
to play in ensuring the nation's tax system
is administered with the utmost fairness and integrity."

The President and Secretary Lew have asked for a report by the end of next month about our progress on these efforts. And my first step in that process is to begin meeting with many of you and ask for your ideas, advice and counsel. The people of the IRS are what make this organization what it is and guide the incredibly important work that we do on behalf of the American people. Particularly at this time, we have an indispensable role to play in ensuring the nation's tax system is administered with the utmost fairness and integrity.

Our path forward must be with this priority front of mind. We all take tremendous pride in what we do for the American public, and it is that pride and commitment that I trust will guide us going forward. For example, as the nation comes together to support the victims of the devastating tornadoes in Oklahoma, we should all feel a sense of pride that IRS is actively supporting the recovery effort and doing our part to help.

I look forward to meeting many of you in the coming days. In the meantime, please do not hesitate to reach out to me directly with any thoughts and perspective on what we can do together to help this organization continue to thrive and serve the public.

That's a lot to take in. IRS employees can prepare for their new directives by re-reading the message while they're chilling out at home on Friday, the first of five sequester-induced furlough days planned for this summer.