Memorial Day 2013: Remembering those who gave all, offering some tax help for those still giving

Others take advantage of the ubiquitous sales that are pegged to every holiday. Some shoppers even get a few sales tax savings this weekend and beyond.

And millions of us have, will or will again fire up the grill. But, as the poster below notes, it's Memorial Day, not National BBQ Day. Memorial Day is the official day to remember the men and women who died while serving in the United States Armed Forces. It began as Decoration Day to commemorate the Union and Confederate soldiers who died in the Civil War.

In 1967 it was renamed Memorial Day as a way to show that the remembrance was for all fallen military personnel. Four years later, Memorial Day became an official federal holiday celebrated on the last Monday in May. 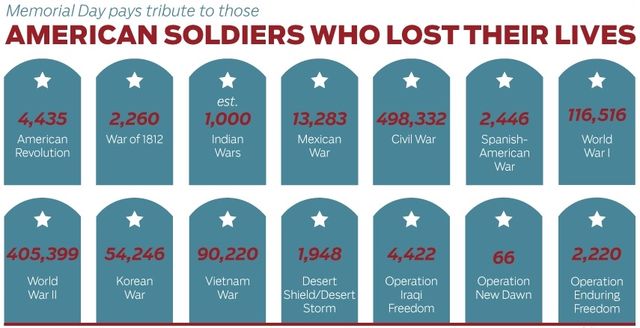 The National Moment of Remembrance is 3 p.m. local time on Memorial Day.

So in between all your other activities today, be sure to take a moment -- 3 p.m. or any other time today or any other day, too -- to acknowledge and honor the many of our service men and women who died in service to our nation.

Tax breaks for the military: Service members are asked to so much for their country, too often without adequate compensation or support.

There are, however, some tax benefits afforded military personnel. Internal Revenue Service Publication 3, Armed Forces Tax Guide, has details on tax considerations and benefits for those in the service. For federal tax purposes, the armed forces includes officers and enlisted personnel in all regular and reserve units controlled by the Secretaries of Defense, the Army, Navy and Air Force, as well as the Coast Guard.

But here are few highlights.

Taxable, tax-exempt pay: Members of the military receive many different types of pay. They include allowances for housing, living expenses, moving costs, travel expenses and combat zone pay. Some are counted as taxable income; other amounts are excluded from tax. Tables 1 and 2, found on pages 3 and 4 of Pub. 3, break out the tax treatment of military income.

Combat pay, compensation that many of our service men and women are receiving based on where they are serving, is treated differently. Some of it can be excluded from pay for tax purposes. But military members also can elect to include nontaxable combat pay in earned income for purposes of claiming the Earned Income Tax Credit (EITC).

Filling deadlines: Military members stationed abroad have until June 15 to file Form 1040. When you file, write "Taxpayer Abroad" at the top of your 1040 and attach a statement explaining your international posting situation. Remember, however, that any tax due should have been paid by April 15.

And if you need beyond mid-June to send in your tax paperwork, you can file Form 4868 to move your tax return deadline to mid-October.

In addition, service personnel who served in combat zones get an automatic extension of the April 15 deadline to file their taxes. The basic extension period is 180 days, but it might be lengthened depending upon when in the tax season you were shipped to a combat zone. If, for example, you were in a combat zone 30 days before the April filing deadline, you get a 210-day extension. You aren't charged any penalties or interest during this extension period.

Notify the IRS of your request for a combat zone filing extension via the agency's special e-mail address combatzone@irs.gov.

Just make sure they are uniforms that you cannot wear when off duty. Also, you have to reduce your deduction by any uniform allowance that you receive.

Also note that this is a miscellaneous itemized tax deduction claimed on Schedule A and the total of these expenses must exceed 2 percent of your adjusted gross income before you can claim them.

Travel expenses: Members of the military reserve or National Guard might be able to deduct travel expenses connected with your unit's training. If you travel more than 100 miles from home and are away overnight, you can deduct your lodging, half of the cost of meals and the standard mileage rate (55.5 cents per mile in 2012; 56.5 cents per mile in 2013) along with tolls and parking fees.

This is an above-the-line deduction claimed on Form 1040, meaning you don't have to itemize to use it. And if you do itemize, you still can take this deduction directly on your tax form, too.

Tax residency: Members of the military usually are taxed in their state of legal residence rather than in the state where they are stationed.

For example, if you have a home in Iowa but are stationed at Edwards Air Force Base in California, if you can show you're a legal resident of Iowa, you would file with your Hawkeye State address instead of as a Californian. Your Iowa tax residency would remain even if you are reposted elsewhere.

The ability to use your legal residence for tax purposes can be particularly beneficial if your state is one that exempts military pay from state taxes.

Check with your state about its tax treatment of military pay, as well as what is required to establish residency. Generally, this includes such things as getting a driver's license, registering your vehicle and paying state taxes, such as income or property taxes.

In addition, thanks to the Military Spouse Residency Relief Act (MSRRA), which became law in 2009, a nonmilitary spouse of a service member now may be able to keep the same state residency as his or her military spouse regardless of the state where they live.

I can recall when I was in the military, and that was quite a few years ago, that many individuals changed their resident state very quickly. Most of the guys in my air wing in Maine were "adopted texans" and were not required to file a state tax return. I'm sure today, with the states needing money as they do, this is policed more closely.