When things aren't going well, most of us have plenty of ways to explain what's going wrong. 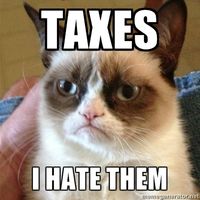 Now we can add another excuse reason for some of our problems. Taxes.

A Harris Interactive poll conducted for the American Institute of CPAs found that stress, brought on by less money due to higher taxes, is taking a toll on our waistlines, friendships and sleep.

Tallying up total tax costs: The 1,011 people reach by telephone in mid-March told pollsters of the ways that financial stress is making their lives miserable.

Around half, 47 percent, of those polled and who considered their financial stress "very" or "somewhat high" said they are sleeping less.

Almost as many, 43 percent, said they have less patience with friends or are seeing them less often.

A fifth of those surveyed, 21 percent, said they are arguing more with a spouse or significant other.

And one in six, or 17 percent, report getting sick more often.

End of payroll tax holiday hurts: Part of the increase in financial worries is because of the return in January of the full 6.2 percent employee portion of the payroll tax. In 2011 and 2012 that tax was 4.2 percent.

When they had to start paying two more percentage points of their take-home pay in taxes, Harris pollsters found that folks cut elsewhere.

Sixty-eight percent reduced spending, savings or made other sacrifices.

Money worry remains on the horizon: In fact, according to the survey, 44 percent of U.S. adults currently register a high level of financial stress.

Women are almost twice as likely as men to say their money concern level is "very high."

And the future doesn't look much brighter.

Only 28 percent of adults see a reduction in financial stress over the next six months.

Are you feeling pressure because of the payroll or other taxes? How are you coping?

OK, it's time for my ice cream break.