Your tax filing stress probably made you smarter

Tax Day is one of the most stressful times of the year.

But it also might just give our brains a boost.

Researchers at the University of California, Berkeley say that acute short-lived stress primes the brain for improved performance. The findings of the seven-member team working at the university's Helen Wills Neuroscience Institute were published April 16 in the open access online journal eLife.

"You always think about stress as a really bad thing, but it's not," according to Daniela Kaufer, associate professor of integrative biology at UC Berkeley. "Some amounts of stress are good to push you just to the level of optimal alertness, behavioral and cognitive performance." 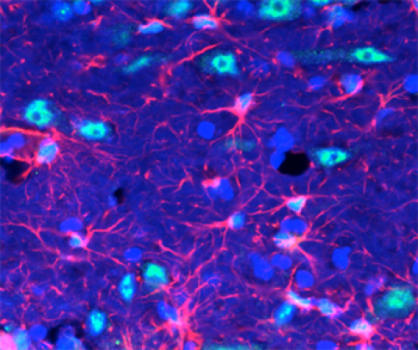 The image above, provided by Kaufer and her UC Berkeley colleague Elizabeth Kirby, offers visual clues as to what your brain might look like when you're struggling to fill out your Form 1040.

The pink brain cells called astrocytes appear to be key players in the response to acute stress. Stress hormones stimulate astrocytes to release the green fibroblast growth factor 2, which in turn lead to new blue neurons.

OK, those aren't human brain cells, but from rats studied by the UC Berkeley researchers. But they show, say researchers, that significant, but brief stressful events caused stem cells in the animals' brains to proliferate into new nerve cells that, when mature two weeks later, improved the rats' mental performance.

As to how this relates to humans under stress, Kaufer said, "I think intermittent stressful events are probably what keeps the brain more alert, and you perform better when you are alert."

Stress' tax ramifications: So you might be thinking that if this study is correct, then tax professionals must be the smartest folks on the planet about this time every year.

Sorry, but these folks experience what most of us consider chronic stress from January through April 15 ... and beyond thanks to us tax-filing procrastinators.

And the UC Berkeley study also found that chronic stress can lead to anxiety and physical health issues.

Still, there's hope for those who suffer a bit of stress, at tax time and periodically the rest of the year.

"I think the ultimate message is an optimistic one," Kaufer said. "Stress can be something that makes you better, but it is a question of how much, how long and how you interpret or perceive it."