Wesley Snipes has been released from federal prison, just in time for Tax Day 2013.

The entertainment website TMZ reports that Snipes was let out of Club Fed on April 2. The actor was convicted in February 2008 of three misdemeanor counts of not filing a federal tax return and started serving his three-year sentence in December 2010. 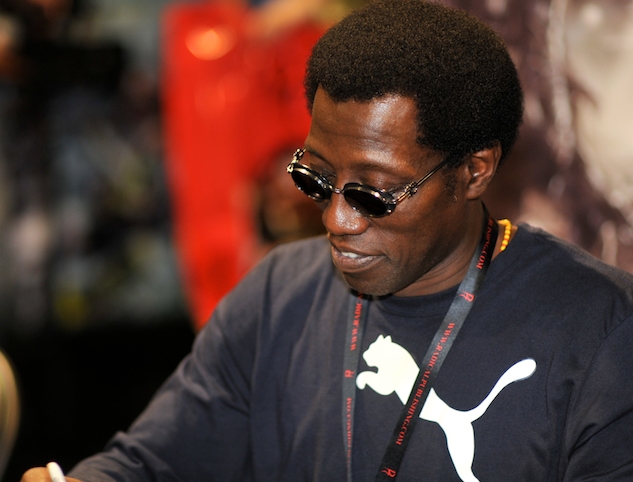 Wesley Snipes signing autographs at Comic-Con 2010. He entered federal prison later that year to serve time for not filing three years' worth of tax returns. (Photo by Athene cunicularia via Wikipedia)

Snipes spent most of that term in the McKean Federal Correctional Institution in northwest Pennsylvania.

House arrest, too: Snipes, however, is not a totally free man.

TMZ says that the Federal Bureau of Prisons has transferred Snipes' case to the New York Community Corrections Office, which for the next few months will oversee the home confinement of inmate #43355-018, as Snipes is officially known on the federal prison system's registry.

The actor, whose wide-ranging roles include action films (Passenger 57 and the Blade vampire trilogy), comedies (White Men Can't Jump and To Wong Foo, Thanks for Everything! Julie Newmar) and dramas (One Night Stand and Mo' Better Blues), reportedly will remain under house arrest until July 19.

While Snipes hasn't been able to make any movies while incarcerated, he no doubt had other streams of income during that period.

I'm sure he and his accountants have made sure he filed the proper paperwork for that money with the Internal Revenue Service.

The price of tax penalties: Let Snipes' fate be a lesson to any of you considering not filing a Form 1040. The civil penalty for not filing a tax return is tougher than not paying what you owe.

The IRS assesses a 5 percent penalty, which is calculated on the amount of tax due, for each month or portion thereof that you don't file a tax return. This can add up after five months to a maximum penalty of 25 percent.

If you file but don't pay all the tax you owe, the IRS only charges a 0.5 percent penalty for each month your tax is not paid in full. There is, however, no maximum for not paying your tax bill.

And if you willfully ignore your tax filing tasks, Uncle Sam will prosecute you on criminal tax evasion charges.

So be sure to get a tax return or extension request to the IRS by April 15.