Being a Grammy winning, critically acclaimed, platinum record selling singer-songwriter can sure come in handy if you're in tax trouble. 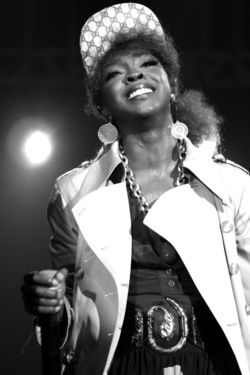 The former front-woman for the Fugees and successful solo artist (and record producer and actress) has been under Internal Revenue Service scrutiny for failing to file federal tax returns for tax years 2005, 2006 and 2007. During those years, said the IRS, she earned $1.8 million.

Last June, Hill pled guilty to the three federal tax charges. Each carries a maximum penalty of one year in prison and a $100,000 fine.

At a sentencing hearing on Monday, April 22, Hill was given two more weeks to come up with the $554,000 in retribution that the court has ordered her to pay. So far, according to her attorney, Hill has repaid $50,000.

It looked like she'd have to pay with money she borrowed against two of her homes. But now she has some outside help in making up the $504,000 difference she still owes.

During the hearing, prosecutors revealed that Hill had signed a new deal with Sony, $1 million for recording five new songs. Sweet.

Of course, Hill won't pocket $1 million, since she'll have to pay taxes on these new earnings.

But Hill reportedly will get more money from the record company if she produces a full album's worth of music.

And that extra income could come in handy since Hill still faces a civil tax liability of almost $1 million from the delinquent federal taxes, interest, penalties and, according to NJ.com, unpaid state taxes.

As for possible incarceration, Hill's attorneys are hoping that her repayment of the retribution assessment early next month will help in their quest to have her placed on probation instead of in prison.

I love this girl and her music, how come she has failed to file taxes for those moments when she has lots of money to pay it for? Sad news but hopefully she can be able to pull it off through the help of Sony. By the way, I included Sony as part of the asset listing I trade ioption review ioptionsreview.com which is part of my small investment, so I was hoping Lauryn Hill could be successful with this endeavor.