Smokers are among the latest federal tax targets

I quit smoking cold turkey more than 30 years ago as a gift to the hubby. But every now and then during tax filing season, I think about lighting up again. I suspect I am not alone in that response to stress. 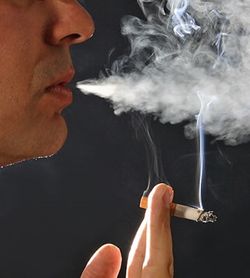 Dependence on, or addiction to if you prefer, cigarettes is one reason why taxing the product is so popular.

Sure, sure, lawmakers say it's for our own good. That by making us pay more for a pack of cancer sticks, we'll smoke less or give them up altogether. And that does work, especially for younger smokers who have lots of other things on which they want to spend their limited disposable income.

Plenty of smokers also have already cut back, if not quit entirely, because their workplaces, like an increasing number of restaurants, theaters and other public areas, are now no-smoking zones.

Two reasons to target smokers: The real reason we keep targeting smokers when it comes to taxes is twofold.

One, smoking has a bad reputation as not only an unhealthy habit, but a nasty one.

I don't dispute that. Even when I smoked, I hated the way it made my hair, clothing, furniture, everything smell. And ashtrays filled with cigarette butts are dirty, especially when your cat thinks it's fun to push them off the coffee table onto the floor.

And two, it makes money for governments.

As I mentioned earlier, higher taxes do cause some smokers to quit, but not all. I know I complained about the cost of smokes and bought them by the more economical carton, but price had nothing to do with my decision to quit.

At least President Obama acknowledges that in his fiscal year 2014 budget.

The president's latest financial plan for the country proposes to almost double the federal cigarette excise tax. Obama wants raise the tax from $1.01 to $1.95 per pack to pay for his "Preschool for All" initiative.

The early education program would, in partnership with the states, provide all low- and moderate-income 4-year-old children with what the White House is calling high-quality preschool. It also would provide incentives to states to expand the program for additional children from middle-class families and establish full-day kindergarten policies.

Sure, the president's budget document says that the cigarette tax hike "would have substantial public health benefits, particularly for young Americans." But at least Obama is honest in noting that the main reason for the tobacco tax hike is to pay for his early-learning project.

State tobacco taxes, too: The federal tax would be in addition to what states already collect on cigarettes. 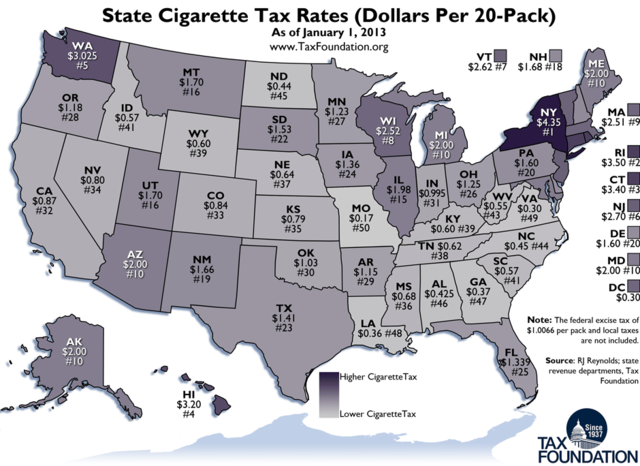 That would mean that New York smokers would pay $5.35 per pack. The Empire State's current $4.35 tax per 20-pack already is the highest cigarette tax in the country.

The cheapest smokes now can be found in Missouri, with its cigarette tax rate of 17 cents per 20-pack. I'm sure Show-Me State nicotine addicts would not be happy with suddenly paying $1.17 per pack, but how many would quit altogether? Uncle Sam, public health claims to the contrary, would hope not many so he could keep raking in the tax cash.

Sin taxes suck: I'm not a fan of sin taxes.

In general, making tax decisions based even in part on public perceptions is bad, and uneven, tax policy. David Leonhardt provides in a recent New York Times Economix blog post a good look at the differing and to many the inequitable tax treatment of tobacco, alcohol and sugary drinks.

Tougher on lower-income earners: Sin taxes also tend to hit lower income individuals harder. Because they have less money, such smokers see more of their money go toward their habit.

Sure, you can argue that they should quit for health and financial reasons, but it's not that simple or easy.

I remember the last time I bugged my dad to quit smoking. He told me it was his one vice and asked if I really wanted him to give up the last thing he enjoyed? I did because I wanted him to live longer, but his brutally honest reply and the sincere pain in his plea made me understand that there are many reasons for smoking and it is not our place to judge those who have them.

Sin taxes, however, aren't going away. They are too convenient of a cover for politicians at local, state and federal (and international) levels when it comes to making hard decisions on how to raise revenue.