Not to get too wonky, but this could affect you, me and our taxes. 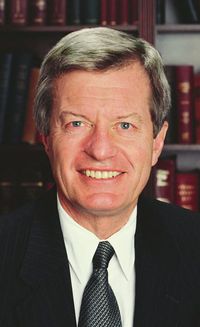 Every media outlet in the nation's capital is reporting that the Democratic chair of the Senate Finance Committee has decided to step down when his current term ends.

UPDATE: It's official. Baucus posted an announcement (and video) of his retirement on his Senate Web page.

One reason that Baucus' decision is not so surprising is that he is expected to face a tough race to keep the seat in his conservative state, which Republican presidential candidate Mitt Romney handily won in 2012.

A friend of Baucus also told ABC News that 71-year-old Senator has been thinking about retiring "for a long time," especially since his remarriage. Baucus "is finally happy," said the friend, and "can still have a life."

A push for tax reform: Baucus' decision to leave the Senate could provide impetus to complete tax reform.

The full Senate Finance Committee currently is holding meetings on the matter. Facing a deadline could be added incentive by the retiring chairman to work out a bipartisan deal to reform our 100-year-old tax code before he leaves Congress.

Similar efforts are underway on the House side, where Ways and Means Chair Rep. Dave Camp (R-Mich.) has set up working groups and is soliciting input on comprehensive tax reform.

Will both sides be willing to make a broad tax deal with elections on the horizon? We shall see.

Wider Senate consequences: Baucus will be the eighth incumbent senator and sixth Democrat to announce plans to retire after 2014.

Many of those seats will be competitive, meaning that the Democrats could lose control of the Senate.

If that happens and the GOP retains its majority in the House, President Obama will find working with Congress even more difficult.

Or not. And that's what concerns many Democrats.

More progressive/liberal members of the president's party already are frequently unhappy with what they see as concessions by Obama to Republican demands.

If no tax reform deal is struck before the 2014 elections and then both the Senate Finance Committee and House Ways and Means Committee are under GOP control, expect the GOP leaders of the tax-writing panels to roll back the current tax rates and make up for the lost revenue in large part via spending cuts.

Of course, Obama could veto any such measures. That would mean at best we'd have at least two more years of legislative gridlock on Capitol Hill. We all remember how little got done in the final two years of the last Democratic president's term when he faced a combative GOP Congress.

Some say Congressional inaction is not necessarily a bad thing. But in reality if Washington, D.C., stands still while domestic and global economies move on, regardless of what direction, we could face longer-term problems.

Or Obama could, as is his nature, look for ways to compromise with a Republican-controlled Congress. That would mean some changes to our tax laws. However, what the president sees as compromise is viewed as surrender by some in his own party.

Regardless of what happens with the 2014 elections, we're likely to be living, to paraphrase the Chinese curse, in interesting political and tax times.

Who's next in line? If Democrats do retain Senate control, Baucus' successor on the Finance Committee is expected to be Oregon Democrat Ron Wyden.

Wyden now is the third-ranking Democrat on the Senate tax panel. He also regularly works with his colleagues across the aisle to craft bipartisan legislation.

He's already done that on the tax front, first with former Sen. Judd Gregg (R-N.H.) and then with Sen. Dan Coats (R-Ind.). The result was a simplified tax act, much of which was incorporated in one of proposals put forth in 2010 by the presidential panel on fiscal reform.