Obama's 2012 effective tax rate was 18.4 percent;
Now what do your members of Congress pay in taxes?

Had enough of your own taxes this year?

Then check out President Obama's and Vice President Biden's 2012 returns. 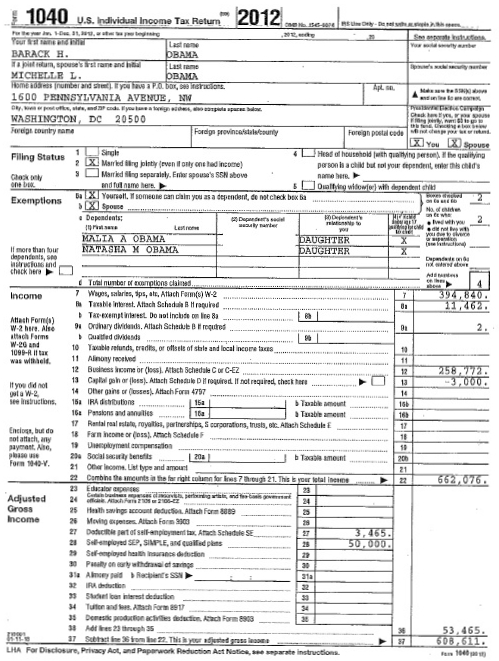 That comes to an effective tax rate of 18.4 percent.

In reaching their final tax bill, the Obamas whittled down their AGI via $258,385 in itemized deductions.

Those Schedule A claims included $63,305 in other taxes paid, $45,046 in home mortgage interest (their Chicago residence, not the White House) and charitable donations totaling $150,034 that went to 33 charities. The largest donation was $103,871 to the Fisher House Foundation.

On the state level, the Obama paid $29,450 to the Illinois Department of Revenue.

Dr. Biden also filed a separate non-resident tax return with Virginia tax officials to report the $125,126 she earned as a professor at a Northern Virginia community college. Her tax bill to the Old Dominion was $3,593.

Questions about Congressional taxes: Now what about your U.S. Representative and two Senators? What do they pay in taxes?

That's a good question that, for the most part, we don't know. But one law professor says that big tax secret should end.

Dorothy Brown, a professor of tax law at Emory University Law School in Atlanta, notes in a recent column for Forbes that while "presidents have voluntarily released their tax returns for the last several decades, nothing could be further from the truth when it comes to members of Congress."

If Capitol Hill lawmakers did release their returns, says Brown, the transparency would likely reveal that their filings are vastly different from those of most Americans.

While the majority of U.S. taxpayers claim the standard deduction, Brown suspects "that if we looked at the tax returns of every member of Congress we would see something close to a 100 percent itemization rate."

Those itemized deductions are essentially tax subsidies for the minority of taxpayers. Or as Brown puts it:

And, argues Brown, "One part of the minority that benefits from itemized deductions is members of Congress."

She's proposing a new report on congressional taxes that would reveal the extent to which federal lawmakers benefit from the tax laws they approve.

That information, which she's calling the 535 Report to correspond with the total number of Representatives and Senators, would provide in summary fashion the information from the tax returns of all members of Congress.

And that data, she says, could provide the route to fundamental tax reform.

"Then we would know what percent of Congress itemized deductions and what the most popular deductions were," writes Brown. "We could then compare the information with what the IRS already produces about the American taxpaying public in general, and hopefully encourage voters to demand change."