Taxes, or more precisely the paying of them, are problematic for lots of folks, including those whose paychecks come from a federal agency.

The Internal Revenue Service last week released data, reported by the AP (it's not yet available on the tax agency's website), showing that nearly 312,000 federal workers and retirees owed more than $3.5 billion in back taxes as of Sept. 30, 2011.

That amount due earns this week's By the Numbers honor.

That amount is a nearly 12 percent increase over the year before.

Overall, the 9.8 million federal workers included in the analysis had a delinquency rate of 3.2 percent.

But that's actually not too bad in the grand tax scheme, er, perspective.

The delinquency rate for the general public during that fiscal year was, according to the IRS, 8.2 percent, five percentage points worse than federal workers.

Legislation already in the hopper: That any of Uncle Sam's employees (or those receiving retirement benefits from him) aren't paying their proper taxes is a concern and sure to set off a firestorm of criticism. 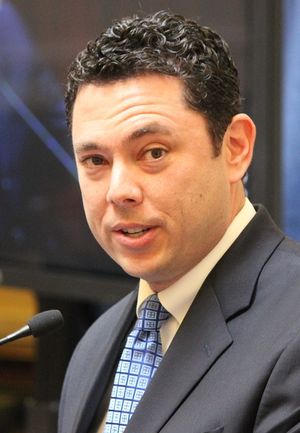 It also might get Rep. Jason Chaffetz (R-Utah; pictured at right) some cosponsors on his bill, H.R. 249, that would fire federal workers who owe back taxes. Under current law, IRS employees are the only federal workers who can be fired for not paying their taxes.

Expanding that personnel option has been one of Chaffetz's legislative quests. In prior legislative sessions he filed bills that targeted federal workers who are "the most serious offenders. They've gotten to the point where the IRS is having to put a lien on their property."

Those same provisions are in Chaffetz's latest measure, the Federal Employee Tax Accountability Act of 2013. He introduced it in mid-January, soon after the 113th Congress convened.

Chaffetz also reintroduced the Members of Congress Tax Accountability Act. This bill, H.R. 884 in the new Congress, would require Representatives and Senators to disclose their delinquent tax liability, would require an ethics inquiry into that delinquency and would garnish the wages of a Member who had a delinquent federal tax liability.

I expect the Congressman's website also will very soon have a statement about this latest report on overdue taxes from federal workers.