President Obama's been making the rounds on Capitol Hill, trying to woo supporters for a grand bargain, a bipartisan agreement to reduce the deficit.

The problem is that both Democrats and Republicans are still entrenched in their traditional approaches to dealing with the country's finances. The GOP wants to take an almost total spending reduction route. Dems want to add some new revenue, aka taxes, to the mix.

As part of his effort to get the loyal opposition at least talking, Obama visited Capitol Hill on Wednesday (March 13) and met with the House Republican Conference.

Seven GOP Representatives got to question the president, including Ways and Means Chair Dave Camp (R-Mich.). But instead of asking Obama anything, Camp explained why Republicans want to enact comprehensive tax reform rather than use the elimination of loopholes as bargaining chips in any fiscal discussion.

"I just said, 'We don't want a piecemeal tax reform because then you don't get the economic growth, job creation and increased wages and benefits that we want to see,'" Camp told Roll Call. He said it was "good exchange" and that Obama "certainly listened and I think the point was made."

Deduction targets: As the two sides were conducting legislative reconnaissance, another Republican was sharing his tax advice in the Washington Post opinion section. 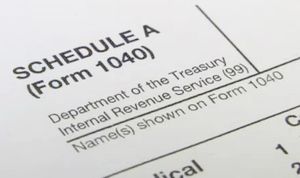 Martin Feldstein, a professor of economics at Harvard University and former chairman of the Council of Economic Advisers under President Ronald Reagan, says it's time to cap tax deductions.

Actually, it's a position Feldstein advocated a month earlier in the Wall Street Journal.

Uncle Sam loses billions of dollars through a variety of relatively small tax breaks that should be totally removed from the tax code, says Feldstein.

But the big political and fiscal challenges are large tax subsidies -- deductions for home mortgage interest, employer-provided health insurance and state and local taxes. Any attempt to eliminate these, notes Feldstein, would almost certainly fail.

"That is why I advocate allowing taxpayers to keep all of their current deductions and exclusions — but limiting the extent to which they can reduce their tax liabilities in this way," writes Feldstein.

"More specifically, I believe that Congress should cap the reduction in tax liabilities that taxpayers can gain from using these special features of the tax code. The tax benefits should be limited to a percentage of the individual’s total income. I favor a cap of 2 percent of adjusted gross income (AGI) on the tax benefit that an individual receives from deductions and from the exclusion of municipal bond interest and of the value of employer payments for health insurance."

Feldstein says a 2 percent limit on deductions and exclusions would raise more than $2.1 trillion. And with that much extra revenue from tax reform, says Feldstein, some tax rates could be cut.

Beginning with the 2013 tax year, single filers making more than $250,000 and jointly filing married couples making more than $300,000 would have their itemized tax expense claims reduced by 3 percent of AGI. The earnings amounts will be adjusted annually for inflation.

But the overall deduction reduction, called the Pease rule after the congressman who originally championed it, can't exceed 80 percent. And the limitation doesn't apply to deductions for medical payments, investment interest expenses, wagering losses and casualty and theft losses.

Feldstein's 2 percent reduction would apply to all taxpayers. Using just itemized deductions, a single filer making $75,000 could claim only $1,500 in deductions. One making $250,000 (the current deduction reduction threshold) would be restricted to $5,000 in deductions on Schedule A.

Charity exempted: And Feldstein also fell prey to the same trap that both tax writers and taxpayers routinely fall into. He carved out a exclusion for a tax break he favors.

Feldstein would spare charitable contributions from the deductions limit.

"The full deduction for charitable contributions should be retained," says Feldstein, "because the money that taxpayers give to charity benefits those organizations rather than the individual taxpayer."

Feldstein says a 2 percent limit on deductions and exclusions would raise more than $2.1 trillion. And with that much extra revenue from tax reform, says Feldstein, some tax rates could be cut.

As long as it will raise employment rate, improve the everyday life of countrymen, I think this policy should be followed.

You said above: "Feldstein's 2 percent reduction would apply to all taxpayers. Using just itemized deductions, a single filer making $75,000 could claim only $1,500 in deductions. One making $250,000 (the current deduction reduction threshold) would be restricted to $5,000 in deductions on Schedule A."

but that's not quite what Feldstein said. He said that the tax "benefit" would be limited to 2% of AGI - and later in the article he clarified that he was talking about the net "tax reduction", so that someone in the 25% marginal rate bracket, for example, would be allowed to deduct 8% of AGI to get the 2% tax benefit.