During a trip to far West Texas a couple of years ago, the hubby and I spotted something intriguing on the horizon.

Yes, we were near Marfa. No, it was afternoon, much too early for the mysterious Marfa Lights to appear.

So we detoured down an unnamed road to see if we could get a closer look. There, smack dab in the heart of the Big Bend region, was a blimp. 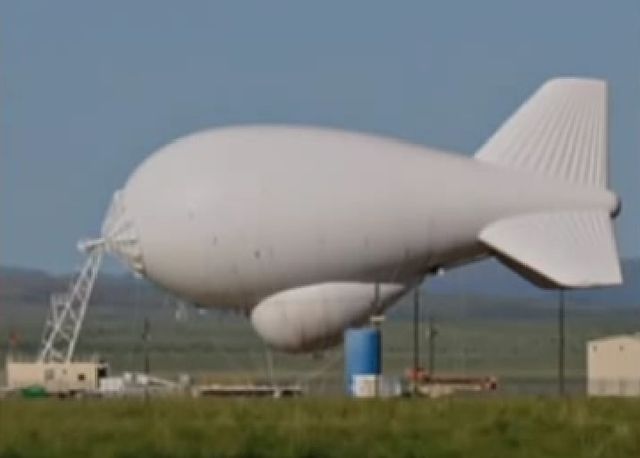 It was much smaller than the airships we'd seen overhead at sporting events. And it was in a fenced area with all sorts of signs warning us to stay off government property.

We didn't trespass, but we also didn't get too close or stay too long. There was something about the pudgy little airship and it's location in the middle of nowhere that was simultaneously amusing and scary.

We later learned we saw Fat Albert, a mini blimp or rather a radar balloon, that sits tethered (when on the job) to the ground about 12,000 feet above the earth. For 16 years, it's been monitoring low-flying aircraft in the Big Bend region, primarily as part of the effort to stop drug smuggling.

It's one of eight similar craft situated along the Gulf of Mexico, Mexican border and Puerto Rico as part of the tethered Aerostat Radar Systems program. The program recently got a reprieve from planned closures when it was transferred from U.S. Air Force control to the Department of Homeland Security.

The Marfa et al blimps are rudimentary forerunners to today's more sophisticated, and controversial, drones. And thanks in part to our firsthand encounter, I've been following the drone debates.

A story in today's New York Times looks at expected growth of the business of drones.

The Federal Aviation Administration is working on rules that would allow the widespread flying of small drones in U.S. airspace starting in 2015. Within five years, according to some estimates, there could be 10,000 of the unmanned aircraft in our skies.

Tax breaks for drone builders: And two California state lawmakers are hoping that many of those drones will be built in the Golden State thanks in part to a tax break for drone manufacturers.

AB 1326, authored by Assemblymen Jeff Gorell, a Republican from Camarillo, and Steven Bradford, a Democrat from Bradford, would provide tax exemptions for construction of new manufacturing plants and for the purchase of machinery used to manufacture the airframes and avionics of unmanned aerial vehicles. The bill also would provide credits for the creation of new jobs in the industry.

"The defense industry has been a huge incubator of jobs in California, especially Southern California," Bradford told the Los Angeles Times. "We want these well-paying, high-tech manufacturing jobs to continue to grow here in California."

Goldberg also pointed to the federal research and development tax credit, which was recently renewed through 2013 as part of the American Taxpayer Relief Act.

"That R&D credit should get the drones moving," Goldberg said. "If that's not sufficient in California, I'm not sure what else would be."

Looking beyond California: The Association for Unmanned Vehicle Systems International (AUVSI), however, thinks California's drone tax break approach is the way to go.

According to the AUVSI report The Economic Impact of Unmanned Aircraft Systems Integration in the United States, released last week, drones will "create more than 70,000 new American jobs in the first three years following the integration of unmanned aircraft systems (UAS) into U.S. national airspace system (NAS)." By 2025, says AUVSI, the new job count should top 100,000.

As for the all-important dollars, AUVSI says drones' total economic impact is projected to surpass $13.6 billion and "will grow sustainably for the foreseeable future, reaching more than $82.1 billion in impact between 2015 and 2025."

And, according to the report, the economic benefits of drones "will flow disproportionately to the states that give drone makers tax breaks and avoid restrictive local rules on drone use."

It might be a relatively new industry, but that's an old argument. We'll see how many states will follow the California example and propose tax breaks for the unmanned surveillance aircraft makers.