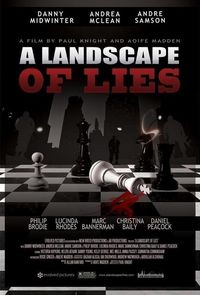 Have you seen "A Landscape of Lies" yet?

The Internet Movie Database listing for the independent British film describes it as a crime thriller about a Gulf War veteran seeking justice for a murdered combat comrade.

The movie went straight to DVD in 2011, but it did have some U.S. fans. It won a Silver Ace award at the 2012 Las Vegas Film Festival.

United Kingdom tax officials, however, gave it a much harsher review.

British tax collectors say the movie was a fake production, hastily cobbled together while the faux filmmakers were out on bail as a way to avoid tax fraud charges.

The movie started as a sham, said prosecutors and tax authorities, as a way to claim almost £1.5 million in goods and services tax for work that had not been done, as well as £1.3 million pounds under a government program that allows filmmakers to claim back up to 25 percent of their expenditure as tax relief.

When Her Majesty's Revenue and Customs officials (the U.K.'s version of our Internal Revenue Service) became suspicious, the group threw together the fake movie they had used to claim the tax breaks.

While it was enough for the Nevada film festival judges, it didn't impress the British legal system.

The tax fraud producers perpetrators, were found guilty of conspiracy to deceive the public revenue. They are first people convicted of defrauding the British Film Commission's tax relief program.

Bashar Al-Issa, 34, from London; Aoife Madden, 31, from Northern Ireland; Tariq Hassan, 52, from Essex; and Ian Sherwood, 53, and Osama Al Baghdady, 42, both from Manchester, are scheduled to be sentenced on March 25.