Kids. If your neighborhood is anything like mine, it's full of 'em. And chances are that some of those children racing bicycles down the street and yelling at each other and laughing with each other and tossing baseballs and soccer balls into your back yard were adopted. 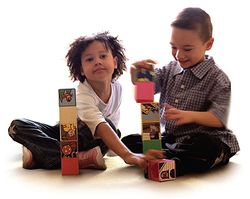 Parents have a lot of reasons for adopting children, but they share a couple of things. The process is time-consuming and expensive.

Uncle Sam can't help speed up adoptions, but he can help, as today's Daily Tax Tip shows, cover some of the costs of adding a new family member.

Eligible parents can make up some of those expenses by claiming the federal adoption tax credit. For 2012 tax returns, it's worth up to $12,650.

This tax credit was made a permanent part of the tax code under the American Taxpayer Relief Act of 2012 that became law on Jan. 2.

Unfortunately for adoptive parents, under the new law the tax credit is no longer refundable. That means it will only be useful in wiping out the amount of tax you owe, not getting you a refund if the credit is more than your tax liability.

Still, zeroing out a tax bill is always a good thing.

And Congress could make enhancements to the credit in the future if it wishes, or hears from enough adoptive parents.

The income limits for both 2012 and 2013 tax years apply to all filing statuses.

Qualifying expenses: OK, you qualify. Now what expenses can you count toward the adoption credit?

Qualified adoption expenses are what the IRS calls "reasonable and necessary" adoption fees. These include:

You cannot count expenses for adopting your spouse's child, for a surrogate parenting arrangement, for any actions that violate state or federal law, that are paid using funds received from a federal, state, or local program or which were paid or reimbursed by your employer or any other organization.

Qualifying kids: Of course, you also must take into consideration the potential new family member. To claim the adoption tax credit, you must adopt or try to adopt an eligible child.

That, according to the IRS, is a child younger than age 18. It also can be an older individual who is physically or mentally incapable of caring for him or herself.

If you attempt to adopt a U.S. child, you may be able to claim the credit even if the adoption does not become final.

A child is a U.S. child if he or she was a citizen or resident of the United States (including U.S. possessions) at the time the adoption attempt began.

If you adopt a U.S. child with special needs, you may qualify for the full amount of the adoption tax credit even if you paid few or no adoption-related expenses, if the adoption is final.

A special needs child is one whom a state or county child welfare agency has determined is not likely to be adopted unless the government provides assistance to the adoptive family.

And the adoption tax credit is per child.

More issues, more info: In keeping with the complexity of adopting a child, there are other considerations, such as the timing of the adoptions and even credit claims. For example, since the adoption tax credit is no longer refundable, you may be able to carry forward any unused credit amounts to future tax years.

You can find additional details on the adoption tax credit in Form 8839 and its instructions (which must be filed in paper, not electronic, form).