Will a relationship neutral tax code save traditional marriage?

On two successive days at the end of this month, the U.S. Supreme Court will hear two cases dealing with gay marriage.

Then on March 27, the justices will hear arguments in United States v. Windsor. This case concerns federal law that denies gay couples who legally marry the right to obtain federal benefits available to heterosexual married couples.

Specifically, in the Windsor case, Edith Windsor filed suit against the federal government in 2010 following the death of her spouse, Thea Spyer, in 2009. In dealing with the financial issues after her wife's death, Windsor learned she had to pay federal estate taxes of $363,053 because the Defense of Marriage Act, or DOMA, prohibits the IRS from recognizing same-sex spouses as surviving spouses.

If Spyer had been married to a man, her estate would have passed tax-free to her spouse.

Contracts, not marriages: Same-sex marriage cases wouldn't need to be litigated if we followed one U.S. Senator's suggestion. 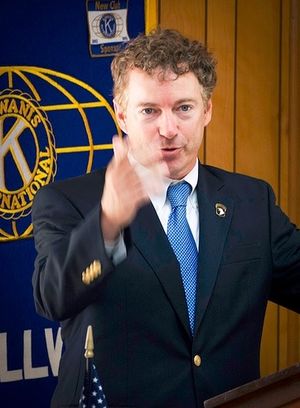 At a media briefing March 12 at National Review's Washington, D.C., offices, Sen. Rand Paul (R-Ky.; pictured at left) said that while he is "an old-fashioned traditionalist" who believes in "the historical definition of marriage," he thinks it might be a good idea to remove that concept from the tax code.

Instead, said Paul, federal tax law should consider instead contracts between adults.

"In fact, if there are ways to make the tax code more neutral where it doesn't mention the word marriage, then we don't have to redefine what marriage is. We just don't have marriage in the tax code. If health benefits are a problem, why don't we not define them by marriage? Why don't we say, you have another adult who lives in the house, and a kid who lives in the house can be part of family coverage? Then you don't have to redefine, and have people like myself, and people who live in the southeastern part of the country, we don't have to change our definition of what we think marriage is, but we allow contracts to occur so there is more ability to [make] the law neutral."

So the idea of marriage would be left to states, and more specifically to the religious groups that perform most of the marriage ceremonies in the United States. What type of vows a couple exchanged would not have any relevance to their taxes and the benefits for which they might be eligible.

Or, as the Washington Post's Right Turn columnist Jennifer Rubin puts it, "conservatives at the national level need to extract themselves from a losing battle that should not be within the purview of the federal government."

"Americans have not bought into the 'traditional marriage' advocates (presumably high divorce rates in heterosexual marriages are none of their business?), most especially the claim that same-sex marriage 'harms' other 'traditional' marriages. (I confess to never having understood that argument.) Paul is dead right: It is time for conservatives to move on and start focusing on issues that are properly the concern of elected leaders and on which the public actually wants government to act."

Of course there are lots of obstacles to doing away with marriage in the Internal Revenue Code. It is larded through the tax law, with special tax rates for jointly filing and separately filing couples. Some tax credits are avaible to couples but not to spouses who don't file one tax return together. Then there are the references to separated taxpayers.

There's even a special IRS document, Publication 504, that spends 29 pages (in PDF format) discussing tax issues that might affect divorced or separated taxpayers.

So while Paul's idea that marriage shouldn't matter when it comes to taxes, the fact is that it does. A lot.

And marriage, particularly between a woman and a man, is important to most of Paul's conservative rather than libertarian brethren on Capitol Hill. So don't expect them to embrace the junior Senator from Kentucky's idea to erase marriage from the tax code.

The best (and easiest) way to make sure the tax code applies to all taxpayers evenly and appropriately is to consider all legally married individuals, regardless of gender, as married federal taxpayers.

Later this year we'll find out what the Supreme Court thinks about this important civil liberties and tax matter.

What do you think? Should we consider Paul's idea to take marriage out of the tax equation? On a personal level, would you feel like your marriage wasn't real if it didn't come into play when you filed your tax return? OK, maybe that last one is only something I think about.