Congress this week finally completed work on more than $60 billion in aid to help communities ravaged three months ago by Hurricane-turned-Superstorm Sandy.

Residents of Monmouth and Ocean counties in New Jersey and Nassau, Queens, Richmond and Suffolk counties in New York now will have until April 1 to meet various tax deadlines. 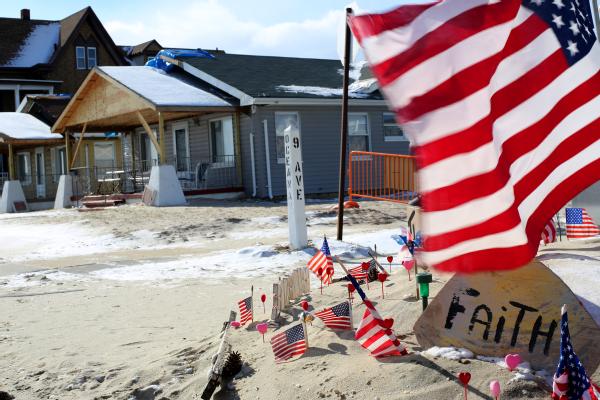 Belmar, N.J., Jan. 21, 2013 -- As recovery measures continue, residents in this coastal community construct a memorial in honor of those who lost their lives and property due to Hurricane Sandy. (Adam DuBrowa for FEMA)

For affected residents, this means they don't have to submit forms or tax payments for filings that occurred starting in late October -- the 26th for Garden State residents and the 27th for those living in the Empire State -- until the new April due date.

This includes the fourth quarter individual estimated tax payment, which for other taxpayers was due Jan. 15, as well as payroll and excise tax returns and payments that were due on Oct. 31, 2012, and Jan. 31.

The IRS decision also gives corporate taxpayers in the designated New Jersey and New York counties a couple more weeks to take care of those tax obligations, which usually are due on March 15.

And affected New Jersey and New York tax-exempt organizations that faced or will face Form 990 series returns during the late-October-to-April time frame also are covered by the IRS' latest action.

For these postponed filings and payments, the IRS says it will abate any interest, late-payment or late-filing penalties that would otherwise apply.

Automatic relief and more: The IRS says it will automatically provide this relief to taxpayers located in the disaster areas.

Plus, says the agency, it will work with any taxpayer who lives outside the designated disaster zones, but whose books, records or tax professionals are located in the areas affected by Hurricane Sandy.

In addition, workers who live elsewhere but who are part of a recognized government or philanthropic organization and who are in the New York or New Jersey disaster areas helping with relief efforts also are eligible for the extended April deadline.

If you don't live in one of the six storm-affected counties but believe you may qualify for this relief, the IRS will listen to your request. Call the tax agency at 866-562-5227 to make your case.

IRS face time, too: OK, you've got more time to file your tax forms and make your payments, but you're confused about something.

Then mark Saturday, Feb. 23, on your calendar. The IRS says its Taxpayer Assistance Centers (TACs) in several New York and New Jersey locations will be open from 9 a.m. until 2 p.m. to provide help to taxpayers affected by the storm.

More info on which TACs will be open longer later this month will be posted on the IRS website.

You can get additional disaster recovery information at DisasterAssistance.gov.

And for all types of disaster information, follow FEMA's disaster declaration Web page.