Fewer expected to pay IRS with credit cards this year

Uncle Sam's all about going paperless and that includes electronic payment of tax bills, too.

But one noncash method of paying federal taxes is not getting much love this filing season, according to a new survey.

Of the poll participants who expect to owe additional taxes when they file their 2012 returns, only a handful said they will use a credit card to pay the U.S. Treasury, reports credit card comparison website CreditDonkey.com.

Fee, fi, fo, bummer: Why? Probably because of the added cost to pay taxes with plastic.

Companies that process the transaction get their cut regardless of who's being paid. That's just business.

When we pay a retailer with plastic, the store absorbs that processing cost. But for federal tax payments, the taxpayer must come up with the fee, which is a percentage of the amount of tax being charged.

"The downside of paying with a credit card is the 'convenience fee' or 'card fee,' ranging from 1.88 percent to 2.35 percent, that the companies charge to process tax payments with a credit card," says Charles Tran, founder of CreditDonkey.

That fee, though, could help lower a tax bill a bit.

A couple of years ago the Internal Revenue Service ruled that credit or debit card convenience fees that we pony up to pay our IRS bills electronically are deductible under certain circumstances:

So the fees won't help most taxpayers. Still, if you do pay the fee when you pay by plastic, keep this in mind for your next year's return just in case you meet the guidelines.

Picking plastic anyway: When push comes to shove and a taxpayer doesn't have enough cash on hand to pay a tax bill, a lot of them reach for the credit card.

Except for this filing season if CreditDonkey's survey holds true.

Most of the 1,109 people polled between Jan 15 and Jan. 22 said they intend to settle up with the IRS via one single payment.

Almost 77 percent of those surveyed plan to pay what they owe this filing season in one lump payment. That percentage also is this week's By the Numbers figure.

That inclination to be done with taxes comes even though more that 60 percent of those polled said they knew about tax installment payment options and 52.1 percent said they realize they could pay with a credit card. 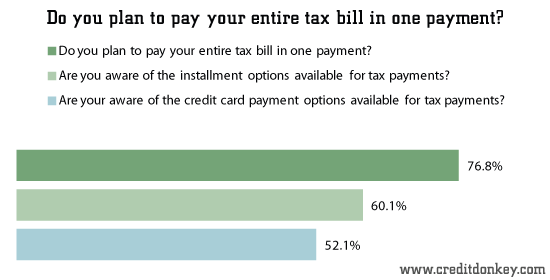 Plastic pays off for some: Some taxpayers like using credit cards to pay taxes because it offers another way to rack up reward points.

If your rewards card requires you hit a high spending minimum to qualify for extra bonus points, a big tax bill could qualify.

Some folks have even been known to use credit card reward points to pay their taxes.

But if you do use a card (not the points) to pay your tax bill, remember that in addition to the service fee you'll hand over up front, you'll also accrue interest charges if you don't pay off the bill each month.

One way around this is to get a new credit card that doesn't charge any interest for a limited time. Use that card to pay your tax bill and then pay off the card during the 0 percent interest introductory period.

Regardless of how you pay any due tax bill, remember that it must be paid by April 15 or you'll end up paying Uncle Sam interest, too.

Paying your taxes using your credit card can be a big mistake because of the credit card fees and interest. If you don’t have the money, you can try getting a personal loan from a community bank where the rates are lower. I advice you start planning now for next year's to avoid all the hassles.