Keeping track of all the fiscal cliff machinations these last few days has left me feeling like a special agent (a very sleepy special agent!) who just completed a crazy mission and who's facing debriefing today.

I'm trying to keep my eyes open long enough to take in follow-up information and share what I know. Please bear with me.

As I mentioned earlier, the 157-page H.R. 8, otherwise known as the American Taxpayer Relief Act (ATRA) of 2012, is full of tax provisions that will affect every filer, some retroactively and others beginning in 2013.

I've covered the bill's major tax law changes for 2013 and before and beyond and I promise I'll examine others here soon.

But I do want to respond to some questions I've been getting, the foremost of which is "so what's my tax bracket?"

Tax brackets for 2013: We know the rates. The six Bush-era rates we've been using for more than a decade are still in place. The 39.6 percent rate now is tacked on top as a seventh tax rate for higher income earners starting this year.

And thanks to the Patient Protection and Affordable Care Act, aka Obamacare, some added taxes will apply to wealthier folks this year (and beyond), too.

The 3.8 percent Medicare surtax on investment income will apply to single taxpayers making at least $200,000 and households making $250,000. This tax will be added to their unearned income totals, including interest, dividends, capital gains, annuities, royalties and rents.

Taxpayers at those income levels now also will encounter a 0.9 percent tax increase on earned income. This added amount will come out of checks via payroll taxes once they hit the earnings threshold.

Grant Thornton created the table below to give us an idea of how much of our 2013 income will be taxed at which rates, as well as how the Medicare surtax and adjusted capital gains and qualified dividends tax rates now will apply. 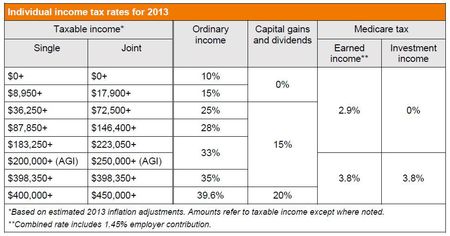 Note that the accounting firm has estimated the income levels for each bracket. This is because the Internal Revenue Service has not yet issued the official 2013 tax bracket inflation adjustments.

In fairness to the tax agency, it had to wait until Congress decided just which tax brackets would need inflation adjustment this year.

A problem at 35 percent? If you look closely at the tax bracket income estimates for 2013, you'll see that a relatively small amount of money will be taxed at 35 percent.

Because the Senate compromise bill that the House grudgingly accepted hiked the top tax rate income threshold to $400,000 for single filers (from the $200,000 that Obama originally wanted), using Grant Thornton's estimates only $1,650 will be taxed at the second highest tax rate.

Of course, married couples filing joint returns will see a bit more of their income fall into the 35 percent bracket -- $51,650 -- because their threshold for going into this tax bracket is $450,000.

Michael Kitces, author of Nerd's Eye View financial and tax planning blog, pointed out this "ridiculously tiny 35% tax bracket for individuals" and opined, via Twitter, that "my gut is that the new mini-35% bracket is going to get 'simplified' out of existence in next year or two."

I agree. A couple more inflation adjustments will push single filers straight from the 33 percent to the 39.6 percent tax bracket.

2013 tax bill calculator: OK, so the table gives you an idea of what your tax rate will be this year, but you want more.

Then check out the Tax Foundation's updated tax liability calculator. You can compare your federal tax burden under three scenarios:

Beware the coming mini-cliffs: Finally, remember that the payroll tax cut is history. This 2 percentage point reduction in the 6.2 percent Social Security (FICA) withholding from your paychecks ended when the ball dropped on Jan. 1.

There's some talk of some sort of similar stimulus measure that might get us few more dollars in our pay each week. Don't hold your breath.

In the next two months we are heading toward three mini-cliffs:

Some stimulus measures might be broached during those battles, but given the ill-will on Capitol Hill right now after the bruising (and perpetually late-night) fiscal cliff battle, neither side is in much or a mood to work together, even for the people who put them there.

Of course, Senators and Representatives and even the president all just might be cranky from lack of sleep like me. After a few good nights of rest, the attitudes on Capitol Hill could change.

And I'll leave you with that hope. I'm off to take a nap!