President Obama today formally proposed expansive federal gun-control measures, including 23 executive orders, in order to stem what he called "the epidemic of gun violence in this country." 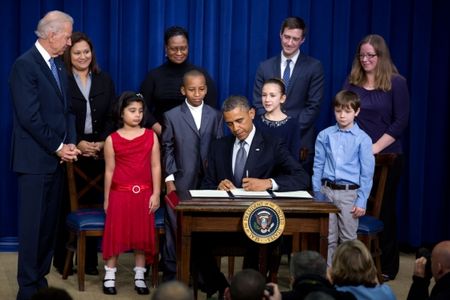 President Barack Obama, surrounded by Vice President Joe Biden and families from around the nation, signs 23 executive orders that are part of the Administration's new gun control proposals in response to the Newtown, Conn., elementary school shootings and other recent gun violence incidents. (Official White House Photo by Lawrence Jackson)

Obama's proposals to institute universal background checks and ban military-style assault weapons and high-capacity ammunition magazines will get most of the attention and opposition from gun fans and the National Rifle Association and similar lobbying groups.

But the president also included items some of his opponents might support, such as placing 1,000 police officers in schools and training more health professionals to deal with young people who may be prone to violent acts.

Plus he wants federal agencies to make more data available for background checks, the Centers for Disease Control to research gun violence and the Senate to sign off on a full-time director of the Bureau of Alcohol, Tobacco, Firearms and Explosives.

No revenue specifics: And oh yeah, we have to pay for all this. The tab will be around $500 million.

That price tag, even when parceled out among the various proposals, is likely to cause as much of a debate in this current Congress as the proposed gun control measures themselves.

Three Harvard University doctors recommended earlier this month in the Journal of the American Medical Association that:

"A new, substantial national tax on all firearms and ammunition would provide stable revenue to meaningfully target gun violence prevention. This revenue should fund a national endowment to benefit those harmed by gun violence and their families; a sustained public awareness campaign to increase gun safety, reduce gun violence, and assist in recognition of at-risk individuals; and stronger enforcement of existing gun laws. Such efforts would not necessarily be intended to reduce ownership, a key regulatory and political distinction."

Lots of other folks also have suggested a national gun and/or ammunition tax. Just Google "gun tax" to see for yourself.

The White House proposal, however, doesn't get into details as to how the money should be raised for its new measures.

It just says Congress should provide.

Uh, Mr. President, you are talking about the folks in the House and Senate who have fought your revenue proposals tooth and nail these last four years, right?

Have you already forgotten the fiscal cliff near disaster. Or the debt ceiling issues in 2011 and coming up again in a couple of months?

Oh, you do realize that. OK then. Let the fiscal and firearms fight begin!

Proliferation of state bills, too: The battle over gun control, however, is not confined to Capitol Hill. And state legislators are getting specific about taxes and violence.

Cook County, Ill., got a head start last fall when its Board of Commissioners considered a violence tax. Back then, I didn't think it had a chance of passage. I was wrong.

The lawmakers for Chicago's home county approved a new $25 tax on each firearm purchased at the suburban gun shops. City law prohibits gun sales in the Windy City itself. The county gun tax will take effect on April 1.

And in Missouri, a Republican state representative wants Show Me State purchasers of violent video games to pay an added 1 percent sales tax.

The tax would be collected on video games rated teen, mature and adult only by the Entertainment Software Rating Board.

Similar proposed taxes on violent video games failed in Oklahoma and New Mexico in recent years, but the Missouri measure's timing might give it a better chance.

And as the House and Senate consider Obama's federal proposals, don't be surprised to see many state legislatures introduce gun violence bills and taxes to pay for them.

And the President is very busy thinking all this stuff? So, is there any good news with the taxes? I really don't think that gun-banning is successful knowing that there are lots out there who has guns without permits.

What goes around comes around. To those of you who want a high firearms tax and/or the repeal of the second amendment, may the home invaders knock on your door first. Once you get a taste of someone else's medicine, I predict you will not be so liberal on this issue the day after the invaders leave...if you are still alive. Had the woman in the crawl space in Georgia not had a gun, it would have been her and her children who would have been dead.
Thanks.