The 2013 driving season won't kick in until Memorial Day weekend. That's quickly followed by thousands of Americans hitting the road for summer vacations.

But some folks are already worrying about the cost of those trips from a gas price standpoint as well as possible taxes.

The Government Accountability Office issued a new report in December 2012 that examines the financial advantages, for Uncle Sam, not drivers, of a mileage-based transportation tax system.

Your highway tax dollars at work: Federal funding to build and maintain the nation's highways and bridges comes primarily from federal fuel taxes.

But that money is drying up. 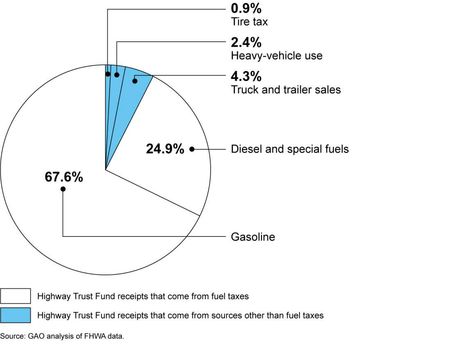 View a larger version by clicking the image.

The big problem is that the fuel tax rates aren't adjusted annually for inflation.

But the inflationary bite, says the GAO, means that the current 18.4 cents per-gallon gas tax is effectively worth about 11.5 cents today.

Add to that the ever-improving vehicle fuel efficiency standards and we're looking at less and less each year to build and repair the country's roads.

Per-mile tax talk back: In light of these funding challenges, the GAO examined alternative means of raising revenues by charging drivers fees based on their miles traveled.

That's right. Talk of a per-mile tax on drivers is back -- the mileage tax idea was floated by the Department of Transportation back in 2011 -- at least at the GAO.

In compiling this report, government analysts looked at five U.S. pilot projects and programs in Germany, New Zealand and the Netherlands. It also surveyed state Departments of Transportation views.

And getting down to dollars, the GAO modeled mileage fees for passenger vehicles and commercial trucks.

"We modeled the average mileage fee rates that would be needed for passenger vehicles and commercial trucks to meet three illustrative Highway Trust Fund revenue targets ranging from about $34 billion to $78.4 billion per year," reports the GAO. "To meet these targets, a driver of a passenger vehicle with average fuel efficiency would pay from $108 to $248 per year in mileage fees compared to the $96 they currently pay annually in federal gasoline tax."

And it recommends that if Congress wants to further explore mileage fees, it should establish a pilot program to test the viability of such charges for commercial trucks and electric vehicles.

Why electric? Although there are relatively few electric vehicles on U.S. roads right now, their numbers are expected to increase and they do not contribute to the Highway Trust Fund.

Without a federal pilot program to evaluate ways to more accurately charge electric vehicles (and commercial trucks) and the costs and benefits of such systems, says the GAO, Congress doesn't have critical information to evaluate whether these mileage fees could be a viable and cost-effective tool to help replenish the country's transportation funding needs.

As for the states, the GAO found that few are likely to introduce their own such mileage fees in the next decade, but more than half of the transportation departments would support federally-led field tests of mileage fees for commercial trucks and electric vehicles.

Will Obama include the GAO's per-mile tax pilot program to his annual budget, which is expected to be released in late February or early March?

If he does, the added fuel to the always heated tax fire will make for some hot discussions on Capitol Hill.

Hi there! This is my first comment here so I just wanted to give a quick shout out and tell you I really enjoy reading through your articles. Can you recommend any other blogs/websites/forums that deal with the same topics? Thanks for your time!