It's not often that the hubby's and my lines of work -- golf writer and tax writer -- converge, but that's happened thanks to Phil Mickelson. 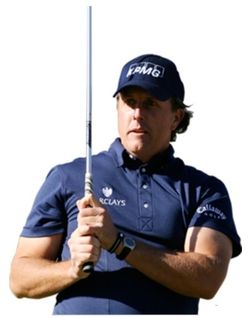 The professional golfer, known to his fans as Lefty, looked to be a little out in left field (if you'll indulge the mixing of sports metaphors) this past weekend when he let slip he was considering "drastic changes" in his professional life because of high state and federal taxes.

The four-time major champion (2005 PGA Championship and 2004, 2006 and 2010 Masters) who has a reported combined net worth of nearly $180 million didn't get into specifics. But Mickelson did note that recent federal and California tax law changes put him in "that zone" (and he wasn't talking about sinking a series of 20-foot putts) where he's paying tax collectors much more than he would like.

Higher income taxpayers this year also will face an added 0.9 percent Medicare payroll tax and a 3.8 percent surtax on investment income, thanks to the previously passed health care reform act.

"It doesn't work for me right now," Mickelson said of the tax hikes.

Welcome to the club, Phil.

No one likes paying more taxes, but voters at both federal and state levels have repeatedly supported higher taxes on wealthier individuals. And plenty of other folks unhappy with tax rates make a lot less each year than you do for hitting a little ball across a perfectly manicured landscape.

Doing the tax math: It also looks like you shanked your estimate of a total tax burden of as much as 63 percent.

Sure if you add all those tax rates, you come up with 57.6 percent. And we'll add in the various jock taxes he has to pay for prize money won at tournaments around the country.

But that total doesn't take into account any credits, deductions (even reduced ones) or other tax moves that could cut his bill.

It also ignores the fact that not every penny that Lefty and all workers make is taxed at their top tax rate. The progressivity of the tax system, both at the federal and California levels, means that your top tax rate generally isn't your actual tax rate.

For IRS purposes, some of Mickelson's earnings are taxed at 10 percent to 35 percent rates.

OK, that's not a huge chunk of change when you're making millions a year like the top golfers and other athletes do. Still, it will shave a few percentage points off Mickelson's tax rate and some dollars off his tax bill.

And if some of his earnings are in form of investments, the tax rate for folks in Phil's bracket now is 20 percent. That's not as good as the prior 15 percent rate, but still substantially lower than his 39.6 percent ordinary earnings tax rate.

All these tax ifs mean that while Phil's potential, back-of-the-envelope tax computations might come to 60+/- percent, his real effective tax rate should be much less than that.

Free tax advice: So I have three suggestions for you Lefty.

If you must vent, at least do so privately with your peers from whom you might get more sympathy. You seem to have already gotten that message, probably from your frantic publicist.

The former Republican presidential candidate managed to pay only around 14 percent in taxes on his last return. Granted, that was based on 2011's lower tax rates (35 percent top rate), but Romney didn't even come near 20 percent.

And I suspect since the November election, Romney has amended that filing, as he rightfully should, to claim the charitable deductions he opted not to claim during the White House campaign.

Finally, Phil, talk to one of your sponsors.

You need to ask accounting giant KPMG (nice hat in the above photo, by the way), which reportedly paid you around $44 million last year, to include a tax adviser as part of your deal.

Jeez, taxes, when will I be able to understand you the way tax lawyers do? You are just so complicated. Well, for Phil, that what fame can do and you make a lot of money so the government will surely bag from you.

"No one likes paying more taxes, but voters at both federal and state levels have repeatedly supported higher taxes on wealthier individuals."

Let us not forget that there was a time in this country that voters supported slavery, segregation, etc, etc etc. That doesn't make it right. With the calls for "fairness" in taxes, it is difficult to believe that a combined incremental tax rate in excess of 50% is considered fair by anyone. Once you get past the "they can afford it" argument, which isn't an argument at all, it all comes down to self interest. Sure. I should pay NO taxes. Let the rich people pay them for everyone. That isn't a fair system at all.

That's true, Elmer. And our state officials are trying to get more and more folks to move here. Problem is, despite our governor's assertions, we're not in as good a financial shape as we seem. And without a state income tax, Phil would join all the Texans I hear complaining more loudly every day about the increasing property taxes. With taxes, it's pick your poison. And I think Phil was just having a bad day for whatever reason and took it out on an easy target, the tax collector.

Kay: You're being too harsh on Phil. And I say this as an IRS revenue agent! He's not a sheep waiting to be shorn. If the good people of California want to heavily tax the evil "rich" people, then he has every right to move to Texas where you live.