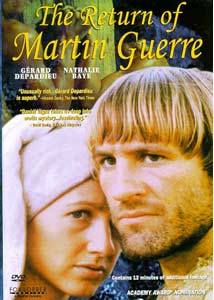 One of the first foreign language films I ever saw was The Return of Martin Guerre.

Gérard Depardieu was so great that I made it a point to see every movie he made. Heck, I even dragged the hubby to Green Card.

Crazy fans like me have made the actor a very rich man. So rich, in fact, that he recently decided it was time to leave his native France for a nearby tax haven.

And by nearby, I mean nearby.

Depardieu has settled in Nechin, Belgium, a village just 800 yards from the French border.

Not only is Nechin close geographically, about a third of its 2,000 residents are French, according to Britain's The Daily Mail.

The newspaper reports that Depardieu now lives on a street known as Millionaire's Row where many of his neighbors are other wealthy French expatriates. They all left before the country starts collecting in 2013 a 75 percent tax on all earnings of more than one million euros (about £850,000 or $1.3 million).

Depardieu isn't discussing his move but Nechin's mayor is.

"He has moved in already and he is very welcome here," Daniel Senesael, the village's top executive, told The Daily Mail. "He enjoys our countryside and our easygoing, rural way of life. And of course he also enjoys our lower taxes."

Escaping U.S. taxes: Tax expatriation was a hot topic in the United States earlier this year when it was revealed that Facebook co-founder Eduardo Saverin renounced his naturalized U.S. citizenship and moved to Singapore.

The relocation was estimated to save Saverin $67 million in U.S. taxes on the $4 billion he made off the social media site's initial public offering.